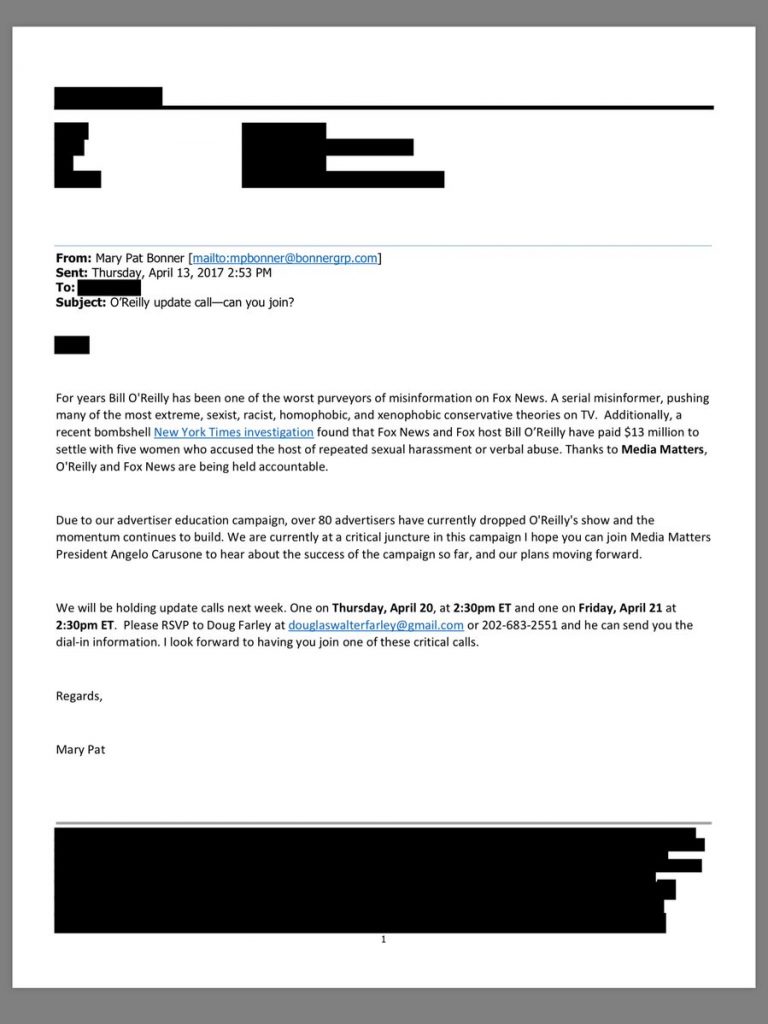 “For years,” the email begins, “Bill O’Reilly has been one of the worst purveyors of misinformation on Fox News. A serial misinformer, pushing many of the most extreme, sexist, racist, homophobic, and xenophobic conservative theories on TV.”

The correspondence was written by Mary Pat Bonner, president of the Bonner Group.  According to the New York Times, Bonner served as a “donor adviser” to former Democratic presidential candidate Hillary Clinton’s campaign.

Through her firm, Bonner connects big money donors to liberal groups seeking donations. Bonner’s contracts give her company a sizable commission — around 12.5 percent — on any money she brings in. In addition to Clinton, the Bonner Group has also advised Media Matters and the American Bridge super PAC.

“The Bonner Group gets us the best fundraising product for the lowest cost,” David Brock, founder of Media Matters and American Bridge, told the Times. “In my experience, the commission incentivizes the fundraiser to meet the ambitious goals we set.”

In the email, which was sent April 13, Bonner heralds the success of her firm and Media Matters’ “advertiser education campaign” against O’Reilly.

“We are currently at a critical juncture in this campaign,” she wrote, before inviting recipients to join a couple of “update calls” on Thursday and Friday.

Bonner’s email was revealed just hours after one of O’Reilly’s lawyers, Marc Kasowitz, claimed that the Fox anchor “has been subjected to a brutal campaign of character assassination that is unprecedented in post-McCarthyist America.”

“This law firm has uncovered evidence that the smear campaign is being orchestrated by far-left organizations bent on destroying O’Reilly for political and financial reasons,” he continued. “That evidence will be put forth shortly and it is irrefutable.”

Dozens of advertisers have pulled their commercials from O’Reilly’s 8 p.m. time slot in the weeks since the Times reported that O’Reilly and 21st Century Fox, Fox News’ parent company, have settled to the tune of $13 million with at least five women who have accused the network host of sexual harassment.

And according to Media Matters, the number of brands that have shifted ads away from “The O’Reilly Factor” has topped 80, “with dozens more quietly taking the action or keeping them off in the first place.” 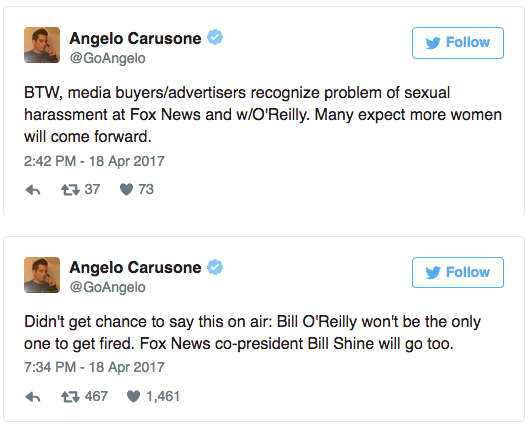 “[pullquote]What’s happening now is a giant smear campaign, and they work[/pullquote],” Beck said on his radio program Wednesday morning, later adding that the left is “splitting the conservative movement and they’re taking the bear out of the door.”

The Wall Street Journal, which is owned by News Corp, a media conglomeration founded by Fox News CEO Rupert Murdoch, reported Tuesday night that the news network is preparing to sever ties with O’Reilly.

But now it appears the Murdochs are nearing a unanimous decision. And in Beck’s mind, it’s all about money — not principles.

“They’re making the decision based on money, and money has nothing to do with principle,” he said, after earlier telling listeners he “would not be saying this if I had personal information” that the accusations against O’Reilly were true.

If the harassment claims end up being true, Beck said he would be “highly disappointed” with O’Reilly. “If there is evidence that something happened, that’s something different,” he said.