Notice: Function add_theme_support( 'html5' ) was called incorrectly. You need to pass an array of types. Please see Debugging in WordPress for more information. (This message was added in version 3.6.1.) in /home/kj8d9sfz7jzn/public_html/federalistpress.com/wp-includes/functions.php on line 5831
 DOJ Official Who Retaliated Against ‘Furious’ Whistle-blower, Lied About Him
The former U.S. Attorney for Arizona could be disbarred, after an investigation found he lied to the Justice Department about his role in trying to discredit the federal whistle-blower who exposed the botched gun-running scheme known as Fast and Furious. 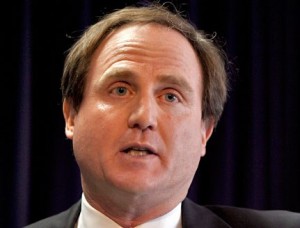 An Office of Inspector General report showed that Dennis Burke — the former chief of staff for Homeland Security Secretary Janet Napolitano appointed as U.S. Attorney for Arizona by President Obama in September 2009 — lied when asked if he leaked sensitive documents to the press meant to undermine the credibility of ATF whistle-blower John Dodson.

The IG report also said Burke likely leaked the memo in retaliation for Dodson’s whistle-blowing, and challenged the credibility of statements he made to congressional investigators. Dodson first went to Congress in 2010 after his own agency and the Justice Department refused to investigate his complaints that Operation Fast and Furious, an anti-gun-trafficking effort, was out of control.

“We also concluded that Burke’s disclosure of the Dodson memorandum was likely motivated by a desire to undermine Dodson’s public criticisms of Operation Fast and Furious. Although Burke denied to congressional investigators that he had any retaliatory motive for his actions, we found substantial evidence to the contrary,” the IG report, released Monday, said.

Dodson appeared before Congress in June 2011. At the time, the Department of Justice denied his claim that the federal government approved a plan to knowingly assist criminals in smuggling thousands of guns to the Mexican drug cartels.

Dodson’s credibility was crucial since nearly everyone above him denied the allegation. The report found that Burke leaked information that sought to undermine Dodson’s story to a Fox News producer.

“The report brings into question, yet again, the treatment that whistle-blowers receive from this administration,” Sen. Charles Grassley, R-Iowa, said Monday. “Instead of examining the allegations that came forward, the Justice Department almost immediately began to attack the credibility and good name of a dedicated federal agent upset with what he was ordered to do.”

Burke used his private email account to leak the information to a friend in Washington who then hand-delivered the information to the Fox producer. The IG said in its report it used an “administrative subpoena” to identify the personal email of relevant Department employees to confirm the leak.

Once contacted by IG staff, Burke admitted he was the source. The IG’s office had asked 150 Justice Department employees to affirm they were not the leak.

At the time, Cole had seen a New York Times story about Fast and Furious. In it, the paper published a picture which showed the document had been faxed from the U.S. attorney’s office in Arizona. When confronted, the report said Burke told Cole, “I don’t think we have a fax machine.”

The IG report claims Burke was “admonished by Deputy Attorney General Cole for lying to him … and had been put on notice such disclosures should not occur.”

The Office of Inspector General is an investigative arm that monitors the Justice Department. It tried to interview Burke, but he resigned.

The IG said Burke violated numerous federal and professional rules of conduct and it would forward a copy of its report to the Arizona State Bar Association for disciplinary conduct.