A group of Egyptian Christians who were detained in Libya where they had gone for work say they were tortured to the point they wanted to die. 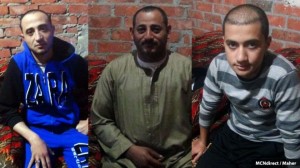 The Copts, who were swept up last month in a raid on a Benghazi market and held on charges of proselytizing because they had Christian symbols on their stalls, told MidEast Christian News

the para-police organization the Ansar el-Sharia forced them to make pro-Islam declarations and insult the late Coptic Pope Shenouda.  The claims came a day after another Copt arrested in the roundup was buried after dying while in Libyan custody. His family says he was tortured, as well.

“I will never forget the torture my colleague, Matta Younan, suffered when he refused to say ‘Pope Shenouda was despicable,’” said Amgad Makar Zaki, 26, who had worked in Libya since 2003. The group of as many as 100 immigrants from neighboring Egypt was held for nearly a month before being deported back home.
Younan’s life was threatened and he was beaten over the head with a stick until a police officer told the torturers to stop.

“From time to time, an Islamic preacher came to tell us about Islam and question our Christian faith and the Bible,” added Zaki. “We constantly heard them shouting ‘Obama, Obama, all of us are Osama’, in reference to al-Qaeda’s late leader Osama bin Laden.”

Zaki told the news service the Libyan Islamists arrested the priest of a Benghazi Christian church, shaving his mustache and torturing him.

Copts, who make up as much as 10 percent of Egypt’s population, have demonstrated against the Muslim Brotherhood government of Mohamed Morsi, saying it did little diplomatically to protect the rights of its Christian citizens who were working in Libya.

“I was deeply affected by the position of the Egyptian embassy,” said Zaki. “Some of us contacted the Egyptian ambassador to intervene and he said he could not do anything.”

Sherif Tawwab Nabil, a 15-year-old student, said his father went to work in Libya so he could provide for his family. The son relayed that while his father was selling clothes on a table in one of the markets in Benghazi, dozens of bearded men attacked the area and arrested Christians after checking their right hands for customary tattoos of the cross.

Atef Nadi Habib, a 33-year-old vendor from Minya, said Copts in Libya face violent oppression never seen during the reign of strongman Col. Muammar Qaddafi, who was ousted in a U.S.-backed revolution in 2011.

“I have worked in Libya for 13 years, and I hold a passport, a residence permit and all my documents are legal,” Habib said. “Conditions were stable, but suddenly the situation changed and Copts began to be subjected to constant threats.”

Habib said the tormentors forced the men to strip and repeat the phrase “Allahu Akbar.” He said the captives repeated the phrase ‘because God is great in all religions.’ But when they were ordered to state the two tenets of Islam – There is no god but Allah and Mohammad is His Messenger, they pronounced the first statement only until they were tortured further and relented.