Notice: Function add_theme_support( 'html5' ) was called incorrectly. You need to pass an array of types. Please see Debugging in WordPress for more information. (This message was added in version 3.6.1.) in /home/kj8d9sfz7jzn/public_html/federalistpress.com/wp-includes/functions.php on line 5831
 Ex-IRS Chief to Testify Before Congress as Carney Admits White House Knew More 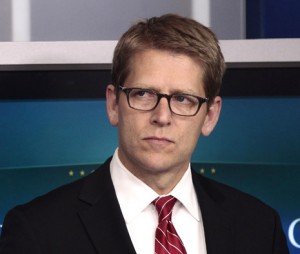 Lawmakers will get their first opportunity to question the man who ran the IRS when agents were improperly targeting tea party groups Tuesday, as the timeline for when senior White House officials knew about the scandal seems to be shifting.

The lawmakers are expected to ask former IRS Commissioner Douglas Shulman why he didn’t tell Congress that agents had been singling out conservative political groups for additional scrutiny when they applied for tax-exempt status — even after he was briefed on the matter.

Shulman, who was appointed by President George W. Bush, left the IRS in November when his five-year term ended. He is testifying before the Senate Finance Committee, which has launched a bipartisan investigation into the matter.

Carney had previously said that White House counsel did not have any details about the IRS probe and was given a generic heads up that one was being conducted.

Senior legal counsel Kathryn Ruemmler was told about the audit on April 24, Carney said Monday. She then told Denis McDonough, Obama’s chief of staff and other senior officials about the investigation.

“No one in this building intervened in an independent investigation or anything that could be seen that way,” he said, adding that the misconduct had stopped in 2012, “almost a year before we knew about it.”

Carney also said while Ruemmler knew the subject of the investigation and potential findings, they were not given a draft of the report and understood details could change.

Ahead of the hearing, the committee Chairman Max Baucus, D-Mont., and Utah Sen. Orrin Hatch, the ranking Republican, sent a letter to the IRS Monday, asking for an explanation. The letter included 41 separate requests for information. They gave the IRS until May 31 to respond.

The two senators said the IRS had not been forthcoming about the issue in the past.

“Targeting applicants for tax-exempt status using political labels threatens to undermine the public’s trust in the IRS,” Baucus and Hatch wrote. “Lack of candor in advising the Senate of this practice is equally troubling.”

For more than a year, from 2011 through the 2012 election, members of Congress repeatedly asked Shulman about complaints from tea party groups that they were being harassed by the IRS.

Shulman’s responses, usually relayed by a deputy, did not acknowledge that agents had ever targeted tea party groups for special scrutiny. At a congressional hearing March 22, 2012, Shulman was adamant in his denials.

“There’s absolutely no targeting. This is the kind of back and forth that happens to people” who apply for tax-exempt status, Shulman said at the House Ways and Means subcommittee hearing.

The IRS has said Shulman did not know about the targeting at the time of the hearing.

The agency’s inspector general says he told Shulman on May 30, 2012, that his office was auditing the way applications for tax-exempt status were being handled, in part because of complaints from conservative groups. However, the inspector general, J. Russell George, said he did not reveal the results of his investigation.

George was also testifying at Tuesday’s hearing. So was Steven Miller, who took over as acting commissioner in November, when Shulman’s term expired. Last week, Obama forced Miller to resign.

George issued a report last week blaming ineffective management for allowing agents to inappropriately target conservative groups for more than 18 months during the 2010 and 2012 elections.

The agents were trying to determine whether the groups were engaged in political activity. Certain tax-exempt groups are allowed to engage in politics, but politics cannot be their primary mission. It is up to the IRS to make the determination, so agents are supposed to look for clues when reviewing applications for tax-exempt status.

In March 2010, agents starting singling out groups with “Tea Party” or “Patriots” on their applications. By August 2010, it was part of the written criteria for identifying groups that required more scrutiny, according to George’s report.

Agents did not flag similar progressive or liberal labels, though some liberal groups received additional scrutiny because their applications were singled out for other reasons, the report said.

Published May 21, 2013 / FoxNews.com / The Associated Press contributed to this report