Notice: Function add_theme_support( 'html5' ) was called incorrectly. You need to pass an array of types. Please see Debugging in WordPress for more information. (This message was added in version 3.6.1.) in /home/kj8d9sfz7jzn/public_html/federalistpress.com/wp-includes/functions.php on line 5831
 Failure to Launch-Time to Shut Down North Korea 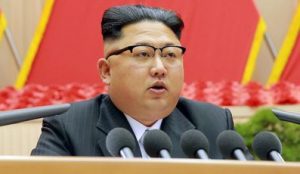 The missile did not go as far as intended, officials with knowledge of the latest intelligence reports said. It did not reach Japanese waters and may have “pinwheeled in flight,” according to one official.

What’s more, the missile might be an older SCUD and not the advanced land version of a submarine-launched ballistic missile (KN-15), as first assessed by the U.S. Pacific Command last night. North Korea launched a KN-15 missile in February — as President Trump hosted Japanese Prime Minister Shinzo Abe in Florida.

In a 23-word statement, Secretary of State Rex Tillerson made it clear the administration was moving in a new direction: “North Korea launched yet another intermediate range ballistic missile. The United States has spoken enough about North Korea. We have no further comment.”

U.S. officials have said they hope China will play a larger role in easing tensions in the region. While China opposes the deployment of a U.S. military anti-ballistic missile system to North Korea, China’s foreign ministry spokesperson Hua Chunying on Wednesday called for de-escalation of tensions. “China has noticed such reports, we all know that the Security Council at the United Nations has issued regulations related to the missile launch by North Korea. We think that all sides involved should exercise restraint and not do anything that will escalate the difficult situation in the region.”

The Pentagon continues to see signs North Korea is close to conducting another nuclear test, after two tests last year.

The KN-15, known as “Pukguksong-2” in North Korea, uses pre-loaded solid fuel, which shortens launch preparation times, boosts its mobility and makes it harder for outsiders to detect ahead of liftoff. Most North Korean missiles use liquid propellant, which generally must be added to the missile on the launch pad before firing.

The South Korean military said the missile was fired from land near the east coast city of Sinpo and flew about 40 miles.

Ralph Cossa, president of the Pacific Forum CSIS think tank in Honolulu, said he was expecting North Korea would do something significant to coincide with President Trump’s first meeting with Chinese President Xi Jinping later this week.

The missile launch may be a precursor, with more to come as the summit starts Thursday, Cossa said. “I’ve joked before that they don’t mind being hated but they definitely hate to be ignored.”

North Korea is pushing hard to upgrade its weapons systems to cope with what it calls U.S. hostility. Many weapons experts say the North could have a functioning nuclear-tipped missile capable of reaching the continental U.S. within a few years. North Korea carried out two nuclear tests last year.