Notice: Function add_theme_support( 'html5' ) was called incorrectly. You need to pass an array of types. Please see Debugging in WordPress for more information. (This message was added in version 3.6.1.) in /home/kj8d9sfz7jzn/public_html/federalistpress.com/wp-includes/functions.php on line 5831
 Fed Court Dismisses Charges Against Cliven Bundy, Cites Prosecutor Abuses 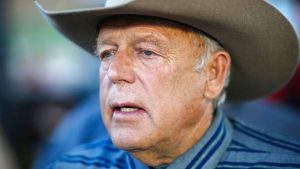 A federal judge dismissed all charges against rancher Cliven Bundy, his two sons and another man on Monday.

U.S. District Judge Gloria Navarro cited “flagrant prosecutorial misconduct” in her decision to dismiss all charges against the Nevada rancher and three others.

Navarro on Dec. 20 declared a mistrial in the high-profile Bundy case. It was only the latest, stunning development in the saga of the Nevada rancher, and served as a repudiation of the federal government. Navarro accused prosecutors of willfully withholding evidence from Bundy’s lawyers, in violation of the federal Brady rule.

“Either the government lied or [it’s actions were] so grossly negligent as to be tantamount to lying.”

The Brady rule, named after the landmark 1963 Supreme Court case known as Brady v. Maryland, holds that failure to disclose such evidence violates a defendant’s right to due process.

The 71-year-old Bundy’s battle with the federal government eventually led to what became known as the Bundy standoff of 2014. But it began long before that.

In the early 1990s, the U.S. government limited grazing rights on federal lands in order to protect the desert tortoise habitat.  In 1993, Bundy, in protest, refused to renew his permit for cattle grazing, and continued grazing his livestock on these public lands.  He didn’t recognize the authority of the Bureau of Land Management (BLM) over the sovereign state of Nevada.

To many, Bundy is a folk hero who stood up to the federal government  (Associated Press)

The federal courts sided with the BLM, and Bundy didn’t seem to have a legal leg to stand on. Nevertheless, the rancher and the government continued this dispute for 20 years, and Bundy ended up owing over $1 million in fees and fines.

Things came to a head in 2014, when officials planned to capture and impound cattle trespassing on government land.  Protesters, many armed, tried to block the authorities, which led to a standoff.  For a time, they even shut down a portion of I-15, the main interstate highway running through Southern Nevada.

Tensions escalated until officials, fearing for the general safety, announced they would return Bundy’s cattle and suspend the roundup.

Afterward, Bundy continued to graze his cattle and not pay fees.  He and his fellow protesters were heroes to some, but criminals to the federal government.  Bundy, along with others seen as leaders of the standoff, including sons Ammon and Ryan, were charged with numerous felonies, including conspiracy, assault on a federal officer and using a firearm in a violent crime. They faced many years in prison.

The Bundy case finally began in late October, 2017. But just two months later, it ended with Navarro angry, the feds humiliated and Bundy – at least to his supporters – vindicated.

In fact, Navarro had suspended the trial earlier and warned of a mistrial when prosecutors released information after a discovery deadline.  Overall, the government was late in handing over more than 3,300 pages of documents. Further, some defense requests for information that ultimately came to light had been ridiculed by prosecutors as “fantastical” and a “fishing expedition.”

“Either the government lied or [it’s actions were] so grossly negligent as to be tantamount to lying,” Napolitano said. “This happened over and over again.”

Steve Kurtz is a producer for the Fox News Channel, and author of “Steve’s America (the perfect gift for people named Steve)”.