Notice: Function add_theme_support( 'html5' ) was called incorrectly. You need to pass an array of types. Please see Debugging in WordPress for more information. (This message was added in version 3.6.1.) in /home/kj8d9sfz7jzn/public_html/federalistpress.com/wp-includes/functions.php on line 5831
 Feds Retaliate Against Romney Supporters 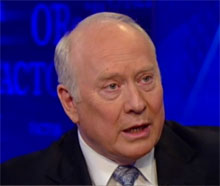 Frank VanderSloot is a good man, personally known to the Federalist Press editors in a non-political context for over 30 years.

The hardworking Idaho businessman was recently targeted by the re-elect Obama campaign for giving $1 million to “Restore Our Future” to support Mitt Romney, and his personal information was posted on leftist websites. As a result of being singled out by the administration for his poor taste in presidential candidates Mr. VanderSloot has been harassed, investigated, maligned and threatened by thugs on the left, all in an effort to convince other potential financial supporters that the price of backing Mitt Romney will always include personal destruction.

Mr. VanderSloot’s story was publicized in the press and he blew the whistle on the Obama campaign’s dirty tactics by telling what Obama supporters had been doing to defame him.

Now, in an abuse of power of Orwellian proportions the administration has personally gone after Mr. VanderSloot, serving him with an audit notice from the IRS. Two weeks after receiving the IRS notice, VanderSloot was served notice that the Labor Department would be auditing records related to “foreign employees” working on his Idaho Falls cattle ranch. Suddenly, the Obama Administration is interested in illegal aliens working in the U.S.

Mr. VanderSloot is a longtime supporter of state and national republican campaigns, and serves on the Romney campaign as a co-chairman.

The Obama campaign has not returned press inquiries about their assault on Mr. VanderSloot, and nor have the IRS or Labor Department.
The documents requested by the IRS have been turned over to his accountant, VanderSloot said, and the Labor Department audit is just getting started, but he will fully comply and expects no problems.

Stand firm Frank, Americans support you, and you will be vindicated in November. We have seen this before, and tyrants and despots are eventually overthrown, one way or another.