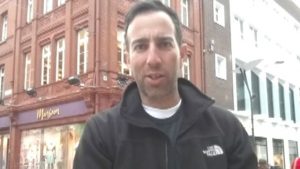 Yet the facts are tossed aside for an alternate reality that borders on the pathological. No one knows this better than Ami Horowitz, producer of Stockholm Syndrome, a documentary about Sweden’s rape crisis, who was beaten by Muslim immigrants after going into a so-called “no-go zone.”

Glenn Beck had a similar experience in Sweden, but left just shy of things becoming physical.

“I was at the place where CBS reporters got into a fight over their camera. We had to leave because our security pushed us out,” Glenn said Tuesday on radio. “They said, as we got into the car, we were minutes away from a riot because we were even there.”

Ami joined Glenn to discuss his experience in Sweden and President Trump’s nonsensical tweet, which has garnered more interest from the press than the atrocities actually taking place throughout Europe.

Enjoy the complimentary clip above or read the transcript below for details.

AMI: It’s a real pleasure to be back, Glenn.

GLENN: Yeah. Now, so, Ami, are you the guy who Donald Trump was talking about, do you know?

GLENN: Can you tell — okay. What happened? What’s really going on here?

AMI: Well, so what happened was, I came out with this video, Stockholm Syndrome that you teased before. And it came out about, oh, two months ago. And it did fairly well. Got a fair amount of press. Did a few million digital views, about typical of what my videos do. And then a month and a half passes, and Tucker Carlson from Fox News wanted to have me on as a guest. He was talking about Sweden as an example of the problems that refugees are facing in terms of immigration within countries. And he said, “Hey, why don’t you come on and talk about the video.” I said, “Great.” So we talk about the video, no problem. Saturday night, I’m at a bar mitzvah, and my phone starts to blow up. I’m like, “What is going on?” And people are telling me it seems like the president just referenced your interview with Tucker Carlson. I said, “That sounds interesting.” And I heard what the president said. It sounded a little bit weird. It could be interpreted in a couple different ways. And if you are negative against the president, you could interpret it that he was making up some terror attack. If you have more sympathy toward the president, you would say, well, he was really referring last night to the interview. He just kind of stumbled on his words, which he’s apt to do. And all of a sudden, man, this becomes this global international scandal that I find myself in the middle of this maelstrom. It’s absolutely insane.

GLENN: Now, it’s sane because now let’s talk about the documentary. Ami, I was there a year ago doing a documentary on exactly the same thing. Sweden is one of the greatest countries, I think in the world. It is — it is wildly socialist, but it’s pretty easy to be socialist when it’s homogenized as Sweden is. Everybody looks the same. Everybody, you know, comes from the same background, et cetera, et cetera. So there’s no real strife in Sweden historically.

But they have prided themselves in being the — the healers of the world. They’re just a different group of people. And I love them for this. The problem is, is they give free housing, free clothing, free food, free everything to refugees.

GLENN: Free cash. And so the refugees are pouring into Sweden. And I was in those no-go zones. I stood at that same strip mall where you were assaulted and I was almost assaulted and 60 Minutes —

AMI: Liar. Liar. Liar. There are no-go zones. Nobody gets through these places. That’s what I’m hearing all day long from Sweden.

GLENN: I know. I know. And what’s interesting is, you were — in your documentary, you have the audio because they told you to turn the cameras off, and you wisely did. But then, you know, like the — like the bull in a China shop that you are, you stayed and just started asking a simple question, why? What is the problem with filming here? And they beat you up.

GLENN: And it’s all on tape.

GLENN: Hang on. Then what’s amazing is you spoke to the Swedes afterwards, and they all say there’s no problem.

AMI: That’s the most amazing — and that’s maybe — now, considering I got my butt kicked, I still found that last part of the video where I interviewed Swedes, and they deny any problem. Maybe the troubling aspect of this whole thing is that they are the self-denial — it borders on the pathological. They are doing whatever they can to avoid the reality of the truth. And if that means make up fake statistics, they’ll make them up. If that means to say that you weren’t beat up, then that’s what they’re going to say. Their narrative of being a humanitarian superpower is something — they’re so proud of it. They’ll come up with these happy stats, right? Happy stats. We’re all good. Everything is good. And just deny the reality on the ground. And it’s sad, it’s confounding, and they’re trying to do the right thing. Don’t get me wrong. They’re trying to reach out and do this selfless act of humanity. But like the saying goes, no good deed goes unpunished. And, boy, are they being punished.

GLENN: Yeah, no, I will tell you — this is why I love the Swedes so much. They have a different attitude. They really do believe that they are the — you know, America sees itself as the savior of the world. We march in and we take care of things. They see themselves as the beachhead of the — the hospital of the world that takes in all of those who are, you know, having some sort of problem and brings them to their shores and heals them. But it’s not what’s happening. And listen to the amount of denial to the country which has now become the rape capital of the world. Listen to the people from the Ami Horowitz documentary.

GLENN: Here it is.

VOICE: Do you think the sexual assault problem is an Islamic problem, or not really?

VOICE: No, no, no. I think it’s a general problem among — among men.

VOICE: Yeah, the problem isn’t like this culture or that culture. The problem is male culture.

VOICE: I don’t think the immigrant is a problem.

VOICE: And I don’t see that connection at all.