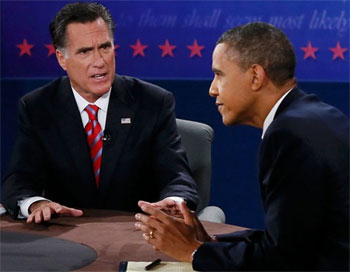 The presidential contenders met Monday evening for the final debate before the elections. Their respective strategies were revealed early – Obama would attempt to paint Romney as a cowboy on foreign policy and Romney would avoid confrontations and maintain his 6% lead in the polls.

As the 90 minute debate played out, the subject drifted away from foreign policy on several occasions, with both sides conceding that America must have a strong economy before it can project its values around the world. During those exchanges Obama misrepresented Romney’s positions several times, as has been the theme of his entire campaign. He also blatantly misrepresented his own positions on a few occasions, which causes observers to scratch their heads, because fact-checking these matters is quite easy.

The truth of Obama’s foreign policy is that he has been a sympathetic advocate of Muslim expansionism in the Middle East and elsewhere, and has thrown our ally Israel under the bus every chance he’s had. Obama has also diminished America’s standing in the international community by projecting weakness, resulting in the firestorm that is the Middle East and northern Africa. He and his allies in the senate have ensured a $ trillion reduction in the military budget if Romney and republicans are not voted in to replace democrats.

At one point in the debate Obama tried to paint Romney as anti-American auto industry, claiming that he was against helping Detroit through its financial woes. Indeed, Obama-Biden have often made the claim that Romney wanted to let the auto industry go into bankruptcy. The FACT is that Obama-Biden let them go through bankruptcy. In the process, Obama intervened and directed the bankruptcy court to ignore the claims of the secured creditors, and to validate the unsecured claims of Obama’s union cronies—a reversal of bankruptcy law. The unions walked away with billions of taxpayer dollars, and the secured creditors who invested heavily in the auto industry walked away broke—a mistake no one will be willing to repeat, no doubt.

When Romney pointed out that his position had been to help Detroit pay off its creditors in a workable bankruptcy action and prop it up afterward with government guarantees, Obama flatly denied the claim, saying it was untrue. The FACT is that Romney outlined his policy in a 2008 New York Times editorial, writing, “The federal government should provide guarantees for post-bankruptcy financing and assure car buyers that their warranties are not at risk.”

Similarly, Obama disputed Romney’s claims about his education program successes while he was the governor of Massachusetts—simply denying that those gains were made under Romney’s watch or that the state paid college tuition for those in the top 25% of their high school classes was instituted by Romney. The FACT is that Romney was correct, and Obama was wrong in his assertions.

Despite Obama’s mocking tone and untrue assertions, the final presidential debate seems to have done little to impact the outcome of the race. Obama supporters will believe that he won the debate, and Romney supporters will believe that Romney won. Undecideds appear to be viewing the debates through the filter of the economy. What hasn’t changed is Romney’s rise in the polls, with Gallop and Rasmussen both reflecting a 5 or 6 point national lead for Romney, and substantial gains in the last few swing states.