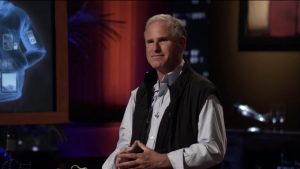 Clothing company founder Scott Jordan of SCOTTeVEST made some widely criticized comments about his customers in a recent Facebook post by calling Fox News viewers, where the company “primarily advertises” its products, “extremely gullible and easier to sell than other networks.”

Jordan’s post goes on to say that he gets to tell the network’s viewers they are “f***ing idiots while getting rich off them.”

Jordan and his wife, Laura Jordan, co-founded SCOTTeVEST in 2000, according to the company’s website. SCOTTeVEST makes multi-pocketed clothing designed to hold various technology pieces such as cellphones and chargers. Scott was featured in season three of ABC’s “Shark Tank” in 2012 where he failed to make a deal with the show’s sharks. 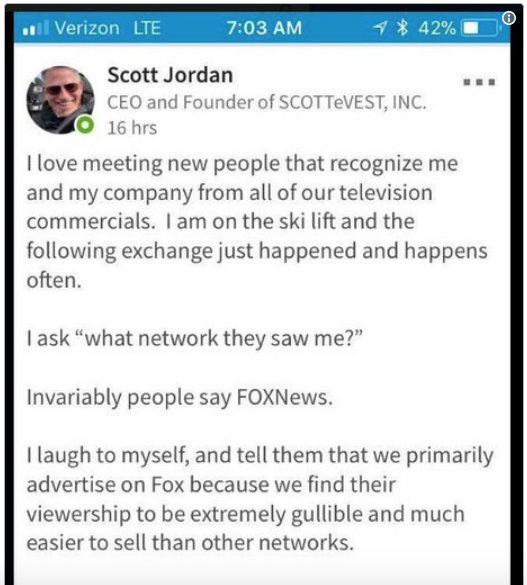 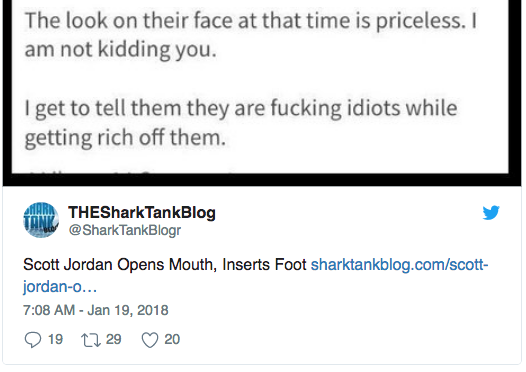 The post was apparently originally posted on Jan. 14, and has since been deleted.

Has he offered an apology?

On Friday, Scott published this apology on Medium:

I am profoundly sorry.

I am profoundly sorry for my horrible and offensive remarks.

This past Sunday, I posted on my personal Facebook page an incredibly rude and inaccurate statement about SCOTTeVEST’s TV advertising on Fox News. On Monday, I removed the offensive post and posted an apology on Facebook. I have since deactivated my Facebook account and the apology is no longer available, so I am writing it here.

To those that I called gullible and idiotic, I am truly sorry.

As the founder of SCOTTeVEST, Inc., I have spent more than 17 years with the help of an amazing team building an awesome company with world class products and customer service. My idiotic statement not only jeopardized all of that hard work, but it also compromised the faith that SCOTTeVEST customers and our team of 20+ employees and contractors entrusted in me.

I also want to apologize to the SCOTTeVEST customer service team, who are taking the brunt of the backlash for my actions. SCOTTeVEST employees are good people that do not deserve to be punished for my actions.

I will continue to learn from my mistakes and strive to become a better person.

What is the company’s response?

Mr. Jordan’s post was impulsive and inappropriate for too many reasons to list, and rightfully offended so many people.

We strongly disagree with the views expressed by Mr. Jordan.

“In addition to his apology, Scott has deactivated his Facebook and Twitter accounts,” Director of Communications Luke Lappala told TheBlaze in an email.

“We are sickened by his remarks. Mr. Jordan’s social media post does not reflect the views of SCOTTeVEST and its employees,” Lappala added.

Why did he step down from management?

Scott stepped down from his daily responsibilities at the company for “personal reasons,” Lappala said in the email.

“In July 2017, all of Mr. Jordan’s responsibilities within our company were given to current President Marshall Rule,” Lapalla wrote.

What’s his current role in the company?

“Mr. Jordan retains his CEO and Co-Founder titles, but he is not involved in our daily operations. He is CEO in name only,” Lapalla said.

What did Glenn Beck say about this?

On Monday, Glenn Beck told his listeners he was outraged by this type of mockery against conservatives in America and this is among the reasons why President Donald Trump won the 2016 election, noting this story did not get noticed by the mainstream media.