Notice: Function add_theme_support( 'html5' ) was called incorrectly. You need to pass an array of types. Please see Debugging in WordPress for more information. (This message was added in version 3.6.1.) in /home/kj8d9sfz7jzn/public_html/federalistpress.com/wp-includes/functions.php on line 5831
 Fox News Finally Reveals Why They Fired Bill O’Reilly Amid Story About O’Reilly Settlement 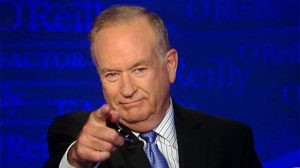 Fox News over the weekend revealed the reason network executives ultimately made the decision to dismiss star host Bill O’Reilly in April. The revelation came in response to a bombshell New York Times story.

What did the story say?

The Times’ story rocked the political world Saturday because it reported the dollar amount that O’Reilly paid to settle sexual harassment accusations levied by Lis Wiehl, one of six woman to levy sexual misconduct accusations against O’Reilly. The settlement was finalized in January.

The story really rattled cages because it reported Fox News renewed O’Reilly’s contract — for $25 million per year for four years — after O’Reilly reached a settlement with Wiehl. The Times’ reported Fox executives knew of the settlement, but not the details, and made a calculated business decision to renew O’Reilly’s contract, which came after Megyn Kelly departed the network, as part of an effort to revitalize the network after it was rocked by the Roger Ailes scandal.

Network executives later made the decision to fire O’Reilly in April because details about the January settlement were slated to become public, according to the Times.

What did Fox reveal?

According to a statement obtained by CNN, Fox News knew of the January settlement, but did not know of the settlement amount.

The Fox spokesman also explained that new conditions were placed in O’Reilly’s contract that said the company could dismiss him should new or additional information surface regarding the sexual misconduct allegations. The company then exercised that new clause in April.

When the company renewed Bill O’Reilly’s contract in February, it knew that a sexual harassment lawsuit had been threatened against him by Lis Wiehl, but was informed by Mr. O’Reilly that he had settled the matter personally, on financial terms that he and Ms. Wiehl had agreed were confidential and not disclosed to the company.

“His new contract, which was made at a time typical for renewals of multi-year talent contracts, added protections for the company specifically aimed at harassment, including that Mr. O’Reilly could be dismissed if the company was made aware of other allegations or if additional relevant information was obtained in a company investigation. The company subsequently acted based on the terms of this contract.

How did O’Reilly respond?

In an interview with the Times, O’Reilly maintained his innocence.

“I never mistreated anyone,” he said. “It’s politically and financially motivated, and we can prove it with shocking information, but I’m not going to sit here in a courtroom for a year and a half and let my kids get beaten up every single day of their lives by a tabloid press that would sit there, and you know it.”

Mark Fabiani, an O’Reilly spokesman, elaborated in a statement that the Times, in its latest story, has “maliciously smeared” O’Reilly by choosing to rely on “unsubstantiated allegations, anonymous sources and incomplete, leaked or stolen documents” instead of concrete, provable facts.

Fabiani also said the story is intended to “embarrass Bill O’Reilly and to keep him from competing in the marketplace.”