Notice: Function add_theme_support( 'html5' ) was called incorrectly. You need to pass an array of types. Please see Debugging in WordPress for more information. (This message was added in version 3.6.1.) in /home/kj8d9sfz7jzn/public_html/federalistpress.com/wp-includes/functions.php on line 5831
 GOP Goes Weak in the Knees, Again–Nunes Steps Aside 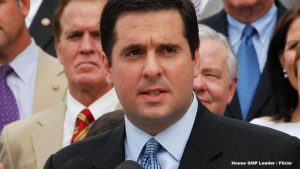 House Intelligence Committee Chairman Devin Nunes on Thursday stepped down temporarily from his role leading the committee’s probe of Russian interference in the 2016 presidential campaign and possible surveillance of Trump associates by the prior administration.

Nunes in a statement cited the efforts of “several leftwing activist groups” to lodge “entirely false and politically motivated” accusations against him with the Office of Congressional Ethics as his reason for sidelining himself.

Nunes said he would “continue to fulfill all my other responsibilities as Committee Chairman” and had requested to speak with the Ethics office “in order to expedite the dismissal of these false claims.”

In a written statement, Nunes suggested the accusations against him were timed to distract from reports about the names of Trump associates being “unmasked” in intelligence files during the latter weeks of the Obama administration by former National Security Adviser Susan Rice.

“The charges are entirely false and politically motivated, and are being leveled just as the American people are beginning to learn the truth about the improper unmasking of the identities of U.S. citizens and other abuses of power,” he said.

A source close to Nunes called the alleged Democrat-led campaign to file complaints with the Office of Congressional Ethics a “clever political trick.” Even if vindicated — which Nunes believes he will be — too much political damage had already been done for Nunes to remain in his role leading the Russia/spying investigations, the source said.

Another congressional staffer agreed with the claim that the complaints were a “coordinated tactic” organized by Democrats, and said the move was made to get the conversation off of Rice. The staffer said the news came on the eve of the Easter recess in order for it to have maximum impact.

In a statement, the House Committee on Ethics said it was looking into allegations that Nunes “may have made unauthorized disclosures of classified information, in violation of House Rules, law, regulations, or other standards of conduct.”

Nunes last month held a news conference in which he discussed viewing classified reports that appeared to show the unmasking of Trump associates. He then controversially went to brief the president before meeting with the intelligence committee.

Some detractors have wanted Nunes removed from the investigation for awhile, pointing to his role as a member of Trump’s transition team and arguing that he could not lead an impartial investigation. Viewing the classified documents on White House grounds and briefing Trump only added fuel to the fire. 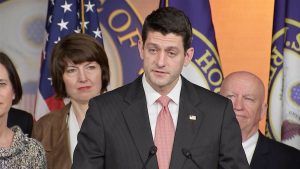 “Devin Nunes has earned my trust over many years for his integrity and dedication to the critical work that the intelligence community does to keep America safe,” Ryan, R-Wis., said in a statement. “He continues to have that trust, and I know he is eager to demonstrate to the Ethics Committee that he has followed all proper guidelines and laws.”

Intelligence Committee Ranking Member Adam Schiff, D-Calif., has publicly criticized Nunes’ conduct and characterizations for weeks, however, he was conciliatory on Thursday.

“I know this was not an easy decision for the Chairman, with whom I have worked well for many years,” Schiff said in a statement. “He did so in the best interests of the committee and I respect that decision.”