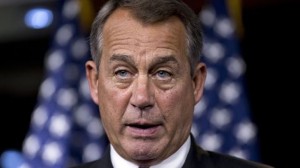 With the 2012 elections in the  books, the result is that there has been no change in the makeup of America’s government. The Democrats won major advances in 2008, but were rebuked in the 2010 elections with the loss of the House of Representatives.

Now, the status quo prevails, and the government is growing larger and intruding evermore into the lives of Americans and burdening their businesses to the point of closing their doors.

As we look forward to the next 3.5 years of Obama governance, our state of the nation is extremely precarious, as real unemployment rates skyrocket, especially for young minorities, and as we head for the brink of a deadly fiscal and social cliff.

During Obama’s first term Republicans in the House were loathe to exercise the power the Constitution affords the House of Representatives. Now, following disclosures of monumental abuses by the IRS and NSA, House Republicans are finally threatening to cut budgets.

Indeed, the time to step up and enforce the Constitution is long past due, and we call upon House Speaker John Boehner to abandon his tepid leadership practices of the past and begin doing what the American people and Constitution sent him to do–govern.

In fact, not one penny gets spent in this nation without the GOP controlled House consenting to it. This fact gives Boehner and the GOP all power. They don’t have to compromise.

Obamacare, deficits, spying on citizens, targeting conservative groups, military cuts . . . these are all titillating fantasies of the left, but need not become our reality if the GOP will just exercise its Constitutional mandates and cut the budgets to offending agencies tasked with implementing unconstitutional policies.

Regarding the budget in general, the GOP must simply send a balanced budget with spending appropriated for Constitutionally mandated items to the Senate with instructions: “Pass this budget and send it to the president for signing, because it is the only budget you will get from us.” If they do that, then go to the golf course; GAME OVER.

Will the Democrats in the Senate and White House whine and scream? Yes. Will it do them any good? No. Why? Because without the consent of the House, the government cannot spend any money. Not one thin dime. Not a penny. Not a peso.

Can the Dems do an end run around the House and appropriate money for their programs? No. Will offending government agencies shut down? Perhaps. Is that bad? No.

Will this plan work? YES! It is time for the GOP to show the American people that they are doing the job they were elected to do–govern within a balanced budget and provide the basic services mandated by the Constitution.