Notice: Function add_theme_support( 'html5' ) was called incorrectly. You need to pass an array of types. Please see Debugging in WordPress for more information. (This message was added in version 3.6.1.) in /home/kj8d9sfz7jzn/public_html/federalistpress.com/wp-includes/functions.php on line 5831
 GOP Pushes Nuke Button, Opening Way for Gorsuch Confirmation 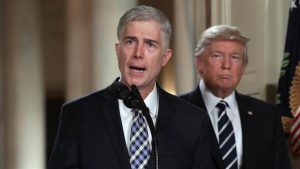 Senate Republicans have voted to stop the Democrats’ filibuster of President Trump’s nominee to the Supreme Court, invoking the so-called nuclear option.

Following a precedent set by Democrats under Harry Reid, senators voted 52-48 along party lines to change the Senate’s precedent, lowering the threshold for advancing Neil Gorsuch from 60 votes to a simple majority.

They then immediately voted 55-45 to advance the nominee to a final confirmation vote, which is expected to occur Friday afternoon after thirty hours of more debate.

Democrats tried to delay it by offering motions to postpone a vote and to adjourn the chamber, but both fell short as Republicans remained unified.

Earlier Thursday, McConnell said the rules change would restore the Senate’s tradition of considering a Supreme Court nominee based on credentials instead of ideology–something the Democrats have transformed over a period of decades. He called the Democratic filibuster of Gorsuch “a radical move” and something “completely unprecedented in the history of our Senate.”

McConnell accused Democrats of having steadily ratcheted up the “judicial wars” over the years and noted that Justice Ruth Bader Ginsburg, President Bill Clinton’s pick for the court in 1993, once advocated for the abolishing Mother’s Day but was still confirmed by a 96-3 vote.

The American Bar Association rated Gorsuch as unanimously well-qualified, but Democrats criticized him for not revealing his personal judicial philosophy during confirmation as well as for several opinions they said showed he tended to favor powerful interests over “the little guy.”

Senate Minority Leader Chuck Schumer (D-N.Y.) argued that Republicans didn’t have to change the rules to put Gorsuch on the court, and that the more sensible option would have been to ask Trump to pick a new nominee. Of course, his argument is twisted and self-defeating. He said replacing Gorsuch would be fair after Republicans refused to give President Obama’s Supreme Court nominee, Merrick Garland, a hearing or a vote last year.

Republicans said they wanted to seat Gorsuch on the court no matter what it took, praising him as an eminently qualified judge who a decade ago would likely have won strong bipartisan support for confirmation.

Times of have changed since the Senate confirmed Chief Justice John Roberts, who was nominated by President George W. Bush, to the court in 2005 with an overwhelming vote of 78-22.

PUBLIUS, with contributions from Alexander Bolton