Notice: Function add_theme_support( 'html5' ) was called incorrectly. You need to pass an array of types. Please see Debugging in WordPress for more information. (This message was added in version 3.6.1.) in /home/kj8d9sfz7jzn/public_html/federalistpress.com/wp-includes/functions.php on line 5831
 Grisham’s “The Firm” Goes Soft 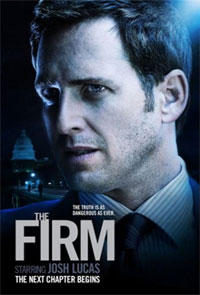 John Grisham’s “The Firm” has been made into a television series, starring Josh Lucas. The premise seemed odd because the 1991 book and 1993 movie concluded with Mitch McDeer and his wife walking away from the law firm that had created so much trouble for them. End of the story.

Undaunted by the passage of time and relevance, writer John Grisham and his fellow producers on the project landed a contract with NBC. The network had trouble finding a workable time slot for the series and ended up relegating it to the never coveted Saturday night time slot (the last move before cancellation).

Being a big fan of The Firm, the book and the movie, I anticipated the debut of the series with guarded excitement. However, the nagging feeling that it would be difficult for the producers to pin an entire multi-year series on a one incident storyline hung over me as I awaited the first episode, and became a full-blown quandary as the season dragged on.

It turns out that my instincts were better than Grisham’s or NBC’s. During the season the storyline has become labored and convoluted. For the past three installments the audience has been treated to a force-fed course of lessons in the grave evil of water boarding. When McDeere is told that something may have happened to his dear wife while in the hands of nefarious captors, he prays that it was nothing more than mere beating or rape. But when the truth is revealed . . . that the bad guys put a cloth and some bottled water over her face . . . McDeere’s pallor goes ashen white and his countenance contorts in horror in a way that only water boarding can evoke.

John Grisham–what happened to you man? You used to be cool. I exaggerate. Actually, Grisham has always been a liberal and his books have become increasingly preachy in their liberal messages.I haven’t even bothered reading the last few.

The public has similarly set aside Grisham’s The Firm, and the series has been canceled. Those who think that the viewing public wants to be overexposed to pet liberal peeves overestimates their own grasp on reality. Not every movie and TV show has to toe the liberal line. Hey Hollywood–give us something we can relate to. The American public actually likes the water boarding of terrorists to prevent the loss of additional American lives. It is the best humane way to get information out of our enemies. Get over it.