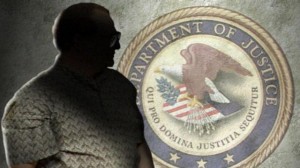 The Justice Department temporarily lost track of two known or suspected terrorists who were in the witness protection program — and allowed others on the no-fly list to board commercial flights — according to a watchdog report which fueled criticism of the administration.

“This is gross mismanagement — pure and simple,” Rep. Bob Goodlatte, R-Va., chairman of the House Judiciary Committee, said in a statement.

The allegations were made in an inspector general report released Thursday

. The report found agencies in the department did not properly share the new identities of some in witness protection — the lapse meant those new names were not updated in the no-fly list.

“Therefore, it was possible for known or suspected terrorists to fly on commercial airplanes in or over the United States and evade one of the government’s primary means of identifying and tracking terrorists’ movements and actions,” the report said.

The report said “some” in the program were able to do just that.

Though the Justice Department says these problems have in large part been corrected, Republicans seized on the report as another example of administration mismanagement. The DOJ is already under fire for seizing journalist phone records, while the IRS faces criticism for a practice of singling out conservative groups.

“Today’s IG report shows that the Justice Department continues to repeat the same mistakes that were made prior to 9/11,” he said, adding that his committee would hold a hearing on the matter.

The Justice Department began making changes in response to the report last year.  The department says it is now sharing information on the new identities of those in the program with other agencies.

The department also said in a letter to Inspector General Michael Horowitz that it has since “identified, located and minimized the threat of all former known or suspected terrorists” in the program.

That includes the two individuals the department temporarily lost track of. Justice Department officials said Thursday that those individuals left the program and the country years ago and had made no effort to return to the U.S. “They’re not fugitives,” one official said.

Officials said there is “no threat to public safety,” stressing that those in the program had been thoroughly vetted from the outset and that most were admitted before the Sept. 11, 2001, attacks.

Both the department and IG stressed that the witness protection program has helped in major investigations including that into the 1993 World Trade Center bombing. The department said the number of known or suspected terrorists in the program amounts to a fraction of a percent.

But Republicans were not satisfied with the assurances.

“This is just another example of the Justice Department’s ineptness at the basic handling of an important program,” Sen. Charles Grassley, R-Iowa, top Republican on the Senate Judiciary Committee, said in a statement. “These people may be in a witness protection program, but they were still known or suspected terrorists. It’s only logical that the federal government know where they are.”