Notice: Function add_theme_support( 'html5' ) was called incorrectly. You need to pass an array of types. Please see Debugging in WordPress for more information. (This message was added in version 3.6.1.) in /home/kj8d9sfz7jzn/public_html/federalistpress.com/wp-includes/functions.php on line 5831
 Gun Store Cancels Mark Kelly’s Rifle Purchase, Questions His ‘Intent’ 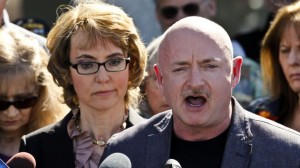 A Tucson gun store owner has decided to rescind the sale of a military-style rifle to Mark Kelly, the husband of former U.S. Rep. Gabrielle Giffords, after Kelly said he had intended the purchase to make a political point about how easy it is to obtain the kind of firearms he’s lobbying Congress to ban.

Kelly’s March 5 purchase of an AR-15-style rifle and a 45.-caliber handgun at Diamondback Police Supply sparked a frenzy of reaction from both sides of the debate after he posted to Facebook a photo of himself shopping.

A background check took only a matter of minutes to complete, Kelly said in the Facebook post, adding that it’s scary to think people can buy similar guns without background checks at gun shows or on the Internet.

But Kelly couldn’t immediately take possession of the rifle because the shop had bought it from a customer. As a result, the store is required by a Tucson ordinance to hold the gun for 20 days to give the city enough time to make sure the weapon wasn’t used in a crime.

Store owner Doug MacKinlay said Monday in a Facebook post of his own that he “determined that was in my company’s best interest to terminate this transaction prior to his returning to my store.”

“While I support and respect Mark Kelly’s 2nd Amendment rights to purchase, possess, and use firearms in a safe and responsible manner, his recent statements to the media made it clear that his intent in purchasing the Sig Sauer M400 5.56mm rifle from us was for reasons other then for his personal use,” MacKinlay said in the statement.

He added that the store will return Kelly’s money, donate the rifle to the Arizona Tactical Officers Association to be raffled as a fundraiser and make an additional contribution of $1,295 — the value of the rifle — to the Eddie Eagle GunSafe Program.

Kelly’s purchase of the guns sparked accusations of hypocrisy from gun-rights supporters, with many on Facebook focusing on his motivations and the rules for purchasing such guns. Kelly, a former astronaut, said he intended to eventually hand in the rifle to Tucson police but planned to keep the handgun.

Kelly and Giffords started a gun control advocacy group, Americans for Responsible Solutions, amid the wave of recent mass shootings. They have been touring the country in recent months in support of expanded background checks for gun purchases.

Kelly bought the guns at a Tucson shop the day before he appeared with his wife at the supermarket where she was wounded during a shooting rampage that left six dead and 12 others injured two years ago. Giffords resigned from Congress last year as she continues to recover from her injuries.

Published March 25, 2013 / FoxNews.com / The Associated Press contributed to this report.