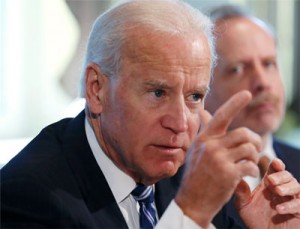 Senate Democrats, joined by 16 Republicans, were able to overcome an attempted filibuster by GOP senators opposed to the current bill. Those senators could still slow-walk the debate, but the Senate will eventually begin votes on amendments — one of which is considered crucial to winning support for a final vote.

The White House called Thursday’s tally an “important” but “early milestone,” as both sides of the issue prepare for a grueling debate — one that is being waged in Washington and on the airwaves.

The amendment likely to be at the front of the line is one from Sens. Joe Manchin, D-W.Va., and Pat Toomey, R-Pa., which would scale back the call for universal background checks. The plan would expand checks to gun-show and Internet sales, but exempt certain personal transactions.

The National Rifle Association and other gun-rights supporters voiced concern about the new proposal, saying it still goes too far. But the plan, offered by two lawmakers who are at the conservative end of their respective parties, could help ease opposition ahead of a final vote.

The legislation required at least 60 votes to advance Thursday. If the bill ultimately passes the Senate, it would still have to pass the Republican-dominated House.

He assured Democrats that a proposal to renew the assault weapons ban and a ban on high-capacity magazines would get a vote as an amendment, though it was dropped from the main bill amid intense opposition. The main bill also includes a measure to increase school safety funding.

More than a dozen Republican senators for days had threatened to hold up the bill Thursday. They voiced concern that the proposal — namely, the background checks provision — would infringe on Second Amendment rights and impose a burden on law-abiding gun owners. They also expressed frustration that, while Manchin and Toomey touted their compromise measure, the bill on the table Thursday did not yet include that. Rather, it included a stricter background checks provision.

“Because the background-check measure is the centerpiece of this legislation it is critical that we know what is in the bill before we vote on it,” Sens. Rand Paul, R-Ky.; Ted Cruz, R-Texas; and Mike Lee, R-Utah, said in a statement. “The American people expect more and deserve better.”

Thursday’s vote follows an intense week of lobbying by gun control advocates, including the families of the victims of the December mass shooting at Sandy Hook Elementary School in Connecticut. That shooting prompted calls at the state and federal levels for new gun legislation.

Advocates like New York Mayor Michael Bloomberg’s Mayors Against Illegal Guns group are likely to spar intensely with the NRA and conservative lawmakers in the coming days as lawmakers debate the bill and advance to a final vote.

The following is a list of Republican lawmakers who voted to advance the gun legislation in the Senate Thursday:

The following is a list of Democratic lawmakers who voted against advancing gun legislation: