Notice: Function add_theme_support( 'html5' ) was called incorrectly. You need to pass an array of types. Please see Debugging in WordPress for more information. (This message was added in version 3.6.1.) in /home/kj8d9sfz7jzn/public_html/federalistpress.com/wp-includes/functions.php on line 5831
 Hagel Calls N. Korea ‘Real and Clear Danger’ 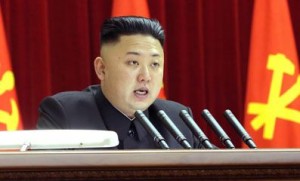 Defense Secretary Chuck Hagel said Wednesday that North Korea’s rising threats pose a “real and clear danger,” as the Pentagon continued to take precautions with a plan to deploy a missile-defense system to Guam.

A senior U.S. official confirmed to Fox News that the military will deploy an Army system shown as a Terminal High Altitude Area Defense battery to Guam. The system is capable of shooting down short-, medium- and intermediate-range ballistic missiles.

This follows the positioning of two U.S. destroyer ships in the region, along with plans to have two sea-based radar systems in the western Pacific.

At the same time, North Korea seemed to ramp up its rhetoric even further Wednesday, warning that it’s military had been cleared to attack the U.S. with “smaller, lighter and diversified nuclear” weapons. The National Security Council responded by saying such “unhelpful and unconstructive threats … only serve to further isolate North Korea.”

Hagel, speaking Wednesday at the National Defense University, said the cascade of threats out of North Korea must be taken “seriously,” given the country’s nuclear and missile-delivery capacity — though analysts say the country still could not fire a nuclear-tipped missile all the way to the continental United States.

“As they have ratcheted up (their) bellicose, dangerous rhetoric — and some of the actions they’ve taken over the last few weeks present a real and clear danger and threat to the interests, certainly of our allies, starting with South Korea and Japan,” Hagel said. He also cited the “threats that the North Koreans have leveled directly at the United States regarding our base in Guam, threatened Hawaii, threatened to the West Coast of the United States.”

The Kim Jong Un regime has toggled in recent weeks between threatening the U.S. and threatening South Korea.

In addition to announcing through an unnamed army spokesman that it had cleared a strike plan for a potential attack on the U.S., North Korea said Wednesday it had decided to bar South Korean managers and trucks delivering supplies from crossing the border to enter a jointly run factory park called Kaesong.

The Kaesong industrial park started producing goods in 2004 and has been an unusual point of cooperation in an otherwise hostile relationship between the Koreas, whose three-year war ended in 1953 with an armistice, not a peace treaty.

The Kaesong move came a day after the North said it would restart its long-shuttered plutonium reactor and a uranium enrichment plant. Both could produce fuel for nuclear weapons that North Korea is developing and has threatened to hurl at the U.S., something experts don’t think it will be able to accomplish for years.

The North’s rising rhetoric has been met by a display of U.S. military strength, including flights of nuclear-capable bombers and stealth jets at annual South Korean-U.S. military drills that the allies call routine and North Korea says are invasion preparations.

In a telephone call Tuesday evening to Chinese Defense Minister Chang Wanquan, Hagel cited North Korea’s pursuit of nuclear weapons and ballistic missiles and said Washington and Beijing should continue to cooperate on those problems.

“The secretary emphasized the growing threat to the U.S. and our allies posed by North Korea’s aggressive pursuit of nuclear weapons and ballistic missile programs and expressed to General Chang the importance of sustained U.S.-China dialogue and cooperation on these issues,” Pentagon spokesman George Little said in a statement describing the phone call.