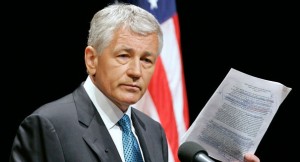 In a telephone call Tuesday evening to Chinese Defense Minister Chang Wanquan, Hagel cited North Korea’s pursuit of nuclear weapons and ballistic missiles and said Washington and Beijing should continue to cooperate on those problems.

“The secretary emphasized the growing threat to the U.S. and our allies posed by North Korea’s aggressive pursuit of nuclear weapons and ballistic missile programs and expressed to General Chang the importance of sustained U.S.-China dialogue and cooperation on these issues,” Pentagon spokesman George Little said in a statement describing the phone call.

North Korea on Wednesday barred South Korean workers from entering a jointly run factory park just over the heavily armed border in the North, officials in Seoul said, a day after Pyongyang announced it would restart its long-shuttered plutonium reactor and increase production of nuclear weapons material.

Seoul’s Unification Ministry spokesman Kim Hyung-suk said Pyongyang is allowing South Koreans to return home from Kaesong, but that about 480 South Koreans who had planned to travel to the park Wednesday were being refused entry.

The two sides do not allow their citizens to travel to the other country without approval, but an exception has previously been made each day for the South Koreans working at Kaesong.

Meanwhile, the Pentagon on Tuesday confirmed that it is positioning an array of military assets near the Korean Peninsula, as the White House stressed that the “entire national security team” is focused on the escalating threats out of Pyongyang — with the latest being a pledge to restart its plutonium reactor.

Secretary of State John Kerry, speaking Tuesday at a news conference with the visiting foreign minister of South Korea, said recent belligerent rhetoric from North Korea is “unacceptable” and that the U.S. will defend itself, as well as South Korea and Japan, from any threat from the North.

The declaration of a resumption of plutonium production — the most common fuel in nuclear weapons — and other facilities at the main Nyongbyon nuclear complex will boost fears in Washington and among its allies about North Korea’s timetable for building a nuclear-tipped missile that can reach the mainland U.S., technology it is not currently believed to have.

The amount of hostile language from North Korea in recent weeks was “extraordinary,” Kerry said, adding that the isolated state should have no doubt that the U.S. will fulfill its treaty obligations to allies in the region.

Pentagon spokesman George Little said that two destroyer warships, the USS Decatur and USS McCain, have arrived in the region as part of a missile-defense mission. Previously, the Pentagon had only revealed that it had moved the USS McCain to the region.

“They have arrived at predetermined positions in the western Pacific, where they will be poised to respond to any missile threats to our allies or our territory,” Little said Tuesday.

In addition, the Pentagon has already announced plans to have two sea-based radar systems in the western Pacific. One is already in northern Japan; the other has not yet deployed and is currently conducting non-North Korean related systems tests off Pearl Harbor.

The system in Japan can serve to protect the Korean peninsula as well as threats to the western United States that originate from North Korea.

Published April 03, 2013 / FoxNews.com /The Associated Press contributed to this report.