Notice: Function add_theme_support( 'html5' ) was called incorrectly. You need to pass an array of types. Please see Debugging in WordPress for more information. (This message was added in version 3.6.1.) in /home/kj8d9sfz7jzn/public_html/federalistpress.com/wp-includes/functions.php on line 5831
 Harry Reid Exempts Staff From ObamaCare 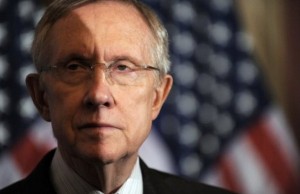 Senate Majority Leader Harry Reid is allowing some staffers to keep their health insurance instead of making them buy it through an ObamaCare exchange, although he was one of the strongest Capitol Hill supporters of the 2010 law.

The Nevada Democrat is exercising his discretion under the president’s signature law to designate which staffers can keep their federal insurance plan and which must now purchase a policy through the District of Columbia’s health-care exchange.

However, he purportedly is the only top congressional leader to exercise that option, which resulted in sharp criticism Wednesday from Texas Republican Sen. Ted Cruz, perhaps the staunchest ObamaCare opponent on the Hill.

“Sen. Reid’s decision to exempt his staff … is the clearest example yet of ObamaCare’s failures and Washington hypocrisy,” he said. “His staff worked to pass it and continue to promote it, now they don’t want to be part of it because it’s a disaster.”

The distinction is between personnel staff, forced onto the exchange, and leadership and committee staff, who are allowed to keep their federal plan.

However, drawing a distinction is difficult because some duties overlap, a Reid staffer told Fox News.

The staffer could not give a breakdown. But Reid is going on the exchange and says he is happy with its options.

An amendment to ObamaCare by Iowa Republican Sen. Chuck Grassley forced staffers onto the exchanges, but additional changes allow for some flexibility. Still, the final rules, put forth by the Office of Personnel Management, leave some discretion with the lawmaker.

“The only fair path forward is to repeal ObamaCare, in its entirety, for everyone,” Cruz added.