Notice: Function add_theme_support( 'html5' ) was called incorrectly. You need to pass an array of types. Please see Debugging in WordPress for more information. (This message was added in version 3.6.1.) in /home/kj8d9sfz7jzn/public_html/federalistpress.com/wp-includes/functions.php on line 5831
 Holder Misled Congress on Pursuit of Reporters’ Records 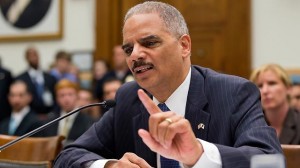 The Justice Department’s acknowledgement that Attorney General Eric Holder was involved in the decision to seek a Fox News reporter’s emails is raising questions about whether Holder misled Congress when he testified on the investigation two weeks ago.

Appearing before the House Judiciary Committee, Holder insisted that “the potential prosecution of the press for the disclosure of material” is not something he was involved in or knew about.

But the Justice Department obtained access to the emails of Fox News reporter James Rosen only after filing an affidavit that accused him of being a likely criminal “co-conspirator” in the leak of sensitive material regarding North Korea.

Rosen was never charged, and never prosecuted. But he was effectively accused of violating the federal Espionage Act, in the course of seeking the search warrant for his files.

J. Christian Adams, a former Justice Department attorney who in recent years has emerged as a prominent conservative critic of his former employer, said Tuesday that Holder seems to have misled Congress.

“Holder said it’s not something I’m involved with, don’t know anything about it — he lied on both counts,” Adams told Fox News.

Holder addressed the matter during a House hearing two weeks ago, under questioning by Democratic Georgia Rep. Hank Johnson. Johnson voiced concern that the Espionage Act of 1917 allows the prosecution of anyone who discloses classified information.

He said: “But we certainly need to protect the privacy of individuals, and we need to protect the ability … of the press to engage in its First Amendment responsibilities to be free and to give us information about our government so as to keep the people informed.”

Holder answered: “Well, I would say this. With regard to the potential prosecution of the press for the disclosure of material, that is not something that I’ve ever been involved in, heard of or would think would be a wise policy. In fact, my view is quite the opposite.”

At the time, Johnson was referencing reports that the Justice Department secretly obtained the phone records of Associated Press journalists.

A few days later, it would emerge that the Justice Department in 2010 also sought the private emails from Rosen’s account, as part of a case against accused leaker Stephen Jin-Woo Kim. An FBI agent cited the Espionage Act in seeking those documents.

And on Friday, the Justice Department acknowledged that Holder was looped in on the decision-making in that case.

“The Department takes seriously the First Amendment right to freedom of the press. In recognition of this, the Department took great care in deciding that a search warrant was necessary in the Kim matter, vetting the decision at the highest levels of the Department, including discussions with the Attorney General,” the department said.

Jesselyn Radack, an attorney who works with the Government Accountability Project and has represented accused leakers, told FoxNews.com that Holder’s statement to the House committee was “at best hypocritical and at worst perjury.”

Holder, though, could argue that, in fact, Rosen was never prosecuted — and so his testimony was not misleading.

A federal law enforcement official said last week that the department had to establish probable cause in the affidavit in order to obtain the search warrant, per the terms of the Privacy Protection Act.

“Saying that there is probable cause to believe that someone has committed a crime and actually charging the person with that crime are two very different things,” the official said. “No reporter has been charged in this case.  And, at this time, we do not anticipate bringing additional charges against anyone in this matter.”

Karl Rove, former adviser to George W. Bush and a Fox News analyst, argued in a FoxNews.com opinion piece last week that, at the least, Holder has “a lot of explaining to do to Congress.”

Meanwhile, there are conflicting accounts involving a Justice Department claim that it notified Fox News’ parent company News Corp. of the investigation. Lawrence “Lon” Jacobs, News Corp.’s general counsel at the time, said they never got the apparent fax from the Justice Department that contained the information about Rosen.

“If the Justice Department wanted Fox to be advised, I think they would have sent the notification to Fox News not News Corp.,” he said. “I don’t know what fax number it went to but if it was faxed to my office it would have been received by my assistant and she would have notified me.”

He said he would have notified Fox News Chairman Roger Ailes had he received it.