Notice: Function add_theme_support( 'html5' ) was called incorrectly. You need to pass an array of types. Please see Debugging in WordPress for more information. (This message was added in version 3.6.1.) in /home/kj8d9sfz7jzn/public_html/federalistpress.com/wp-includes/functions.php on line 5831
 Hope and Change Now Defined 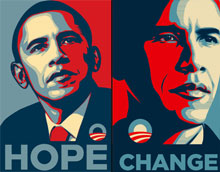 President Obama ran on hope and change when he asked America to make him the president. On the day he took office gasoline prices were $1.79.

The average unemployment rate under George Bush was 5.2 percent, considered full employment for those seeking work.

Candidate Obama blasted the Bush administration for those “dismal numbers.”

Now gasoline prices are stuck near $4.00 a gallon with no relief in sight and the real unemployment and underemployment rate remains above 15 percent, and it is much worse for American minorities. 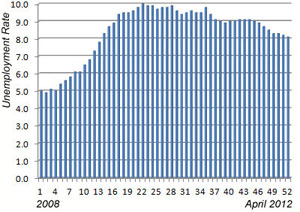 Even the government’s official unemployment numbers have the president’s unemployment rate above 8 percent for most of his administration, averaging 9.0 percent. Federal Reserve Chairman Ben Bernanke testified Wednesday that he projects the official rate will remain between 8.2 and 8.5 percent for the remainder of 2012, and that takes into consideration all of the job seekers who just give up and fade away from government statistics.

Does this indicate that Obama will be voting for Romney in November, because despite increasing the national debt a full 50 percent from $10 trillion to $15 trillion in just 3 years, the economy is much worse than when he took the helm. Of course, the President’s re-election team has begun chanting the mantra that if unemployment dips below 8 percent or gasoline prices drop 10 cents, then that is evidence that the President’s leadership is superior. They’re wrong.

Voters are shaky with Obama’s track record, and a new Fox News Poll reveals that Americans aren’t giving him a lot of credit for effort. Here are the answers of those who were asked-

BEST THING PRESIDENT OBAMA HAS DONE TO HELP THE ECONOMY:

The poll also asked the question that Ronald Reagan posed to voters: Are you better off now than you were four years ago? Of course, as painful a memory as the Jimmy Carter economy was, you may be surprised to learn that the average unemployment rate during his administration was just 7.6 percent–a number that the current administration would claim to be a resounding success.