Notice: Function add_theme_support( 'html5' ) was called incorrectly. You need to pass an array of types. Please see Debugging in WordPress for more information. (This message was added in version 3.6.1.) in /home/kj8d9sfz7jzn/public_html/federalistpress.com/wp-includes/functions.php on line 5831
 House Benghazi Report Slams Clinton and Obama Response to Attacks 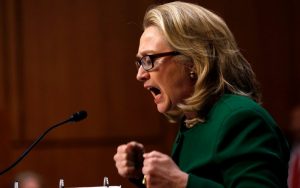 A damning report authored by the Republican-led House committee probing the Benghazi terror attacks faulted the Obama administration for a range of missteps before, during and after the fatal 2012 attacks – saying top administration officials huddled to craft their public response while military assets waited hours to deploy to Libya.

The report released Tuesday pointedly blamed a “rusty bureaucratic process” for the slow-moving response the night of the attack. The report said despite orders from President Obama and then-Defense Secretary Leon Panetta to deploy, the first military force did not do so until more than 13 hours after the attack started.

The report said one anti-terrorism security team known as the FAST unit sat waiting for three hours in Rota, Spain, as Marines changed “in and out of their uniforms four times,” and even debated whether they should carry personal weapons, according to one witness. All together, the report said, “it would take nearly 18 hours” for that team to move.

The report described a web of internal debates and hold-ups, including apparent State Department guidance that “Libya must agree to any deployment,” though Panetta would later say Libya approval was not necessary.

While various officials debated how to proceed, U.S. personnel were under attack at two sites in Benghazi.

In the end, U.S. Ambassador Christopher Stevens and three other Americans — foreign service officer Sean Smith and former Navy Seals Ty Woods and Glen Doherty — were killed in the attacks.

In a stunning detail, the report said the security force that helped evacuate U.S. personnel from the so-called “annex” in the end – “likely saving over two dozen lives,” according to the report – was a unit known as Libyan Military Intelligence composed of former military officers under the Qaddafi regime, which the U.S. helped topple.

The CIA did not know that unit existed. “In other words, some of the very individuals the United States had helped remove from power during the Libyan revolution were the only Libyans that came to the assistance of the United States on the night of the Benghazi attacks,” the report said.

The committee’s work itself was fiercely contested, with Democrats accusing Republican members of trying to politically harm presumptive Democratic presidential nominee Hillary Clinton, who was secretary of state at the time of the attacks.

Chairman Trey Gowdy, R-S.C., asked Americans to “read this report for themselves … and reach their own conclusions.”

At a press conference, Gowdy and other GOP lawmakers lamented that no forces were ordered to Benghazi.

“Nothing was ever coming to Benghazi,” Gowdy said.

Lawmakers contrasted the “heroism” of those on the ground with the discussions in Washington. Rep. Peter Roskam, R-Ill., described the D.C. attitude as “near fecklessness.” He said, “They were more concerned about how they’re going to offend the Libyan government than how this rescue is going to take place.”

The findings about the military asset response the night of the attacks contrasted with the relatively robust internal debate over the public narrative regarding the attack – namely, claims that the attacks were sparked by an anti-Islam YouTube video.

The committee report identified for the first time a White House meeting that was convened roughly three hours into the attack and included deputies to senior Cabinet members and Clinton.

Stevens was missing at the time. But the report found “much of the conversation focused on the video (which) is surprising given no direct link or solid evidence existed connecting the attacks in Benghazi and the video at the time.”

The report found that “five of the 10 action items from the rough notes of the 7:30 pm meeting reference the video.”

The report also showed that there were top-level calls to have the video removed from the Internet, before any of the forces that were ordered deployed “had actually moved.”

The report, meanwhile, found the video narrative was crafted in Washington by Obama administration appointees and reflected neither eyewitness nor real-time reports from the Americans under attack.

One U.S. agent at the American outpost in Benghazi, whose name was withheld for security reasons, told the committee he first heard “some kind of chanting.”

Then that sound was immediately followed by “explosions” and “gunfire, then roughly 70 people rushing into the compound with an assortment of “AK-47s, grenades, RPG’s … a couple of different assault rifles,” the agent said.

In addition, a senior watch officer at the State Department’s diplomatic security command described the Sept. 11, 2012, strikes as “a full on attack against our compound.”

When asked whether he saw or heard a protest prior to the attacks, the officer replied, “zip, nothing, nada,” according to the Republican majority report.

“None of the information coming directly from the agents on the ground in Benghazi during the attacks mentioned anything about a video or a protest. The firsthand accounts made their way to the office of the Secretary through multiple channels quickly,” the report concluded.

Five days later, then-United Nations Ambassador Susan Rice went on every national Sunday talk show. She told Fox News Sunday, “What sparked the recent violence was the airing on the Internet of a very hateful, very offensive video that has offended many people around the world.”

The report also said, “Security deficiencies plagued the Benghazi Mission compound in the lead-up to September 2012.”

The committee proposed 25 recommendations for the Pentagon, State Department, intelligence community and Congress aimed at strengthening security for American personnel overseas. Among them were: Figuring out who is in charge in such situations, holding joint training exercises, and improving communication.

The GOP report came after a report by the Democrats on the panel saying that security at the Benghazi, Libya facility was “woefully inadequate” but Clinton never personally denied any requests from diplomats for additional protection.

“Far from honoring the four brave Americans who died, the Benghazi Committee has been a partisan sham since its start,” he tweeted.

State Department spokesman Mark Toner defended the department in a written statement issued shortly before the report’s formal release, while saying the “essential facts” surrounding the attacks have been known “for some time.”

“We have made great progress towards making our posts safer since 2012,” Toner said. “… Our implementation efforts include work to expand the corps of Diplomatic Security personnel, enhance interagency coordination to address threat information, expand the Marine Security Guard program, and accelerate projects to build and upgrade secure facilities.”

He said the department “cooperated extensively with the Select Committee,” providing over 50 current and former employees for interviews and over 100,000 pages of documents.

The report, though, said the department “withheld a number of documents from the Committee based on ‘executive branch confidentiality interests,’ an administration-constructed privilege not recognized by the Constitution.”