Notice: Function add_theme_support( 'html5' ) was called incorrectly. You need to pass an array of types. Please see Debugging in WordPress for more information. (This message was added in version 3.6.1.) in /home/kj8d9sfz7jzn/public_html/federalistpress.com/wp-includes/functions.php on line 5831
 House Files Articles of Impeachment Against DOJ’s Obstructionist Rosenstein

It was not immediately clear whether the House of Representatives would consider the resolution before lawmakers begin the August recess Thursday afternoon. The House will reconvene Sept. 4.

The resolution states it will be “referred to the Committee,” meaning the Judiciary Committee, for further review. That language suggests the full House will not immediately consider the articles of impeachment.

The articles were introduced by Reps. Mark Meadows of North Carolina and Jim Jordan of Ohio, the chairman and a prominent member of the conservative House Freedom Caucus.

Meadows and Jordan will discuss the articles of impeachment on Fox News’ “The Ingraham Angle” on Wednesday night at 10 p.m. EST.

In one article of impeachment, Rosenstein is accused of improperly signing off on the FISA surveillance warrant application against ex-Trump aide Carter Page.

The application heavily relied on the infamous Steele Dossier, which was funded by the Clinton campaign and the DNC and contained unverified, salacious allegations against President Trump.

“Under Mr. Rosenstein’s supervision, the Department of Justice and FBI intentionally obfuscated the fact the dossier was originally a political opposition research document before the FISC [Foreign Intelligence Surveillance Court],” the articles of impeachment state.

They continue: “As Deputy Attorney General, Mr. Rosenstein has failed in his responsibility for the proper authorization of searches under FISA, and his conduct related to the surveillance of American citizens working on the Trump campaign has permanently undermined both public and congressional confidence in significant counterintelligence program processes.”

The documents also charge that Rosenstein has an impermissible conflict of interest.

“His conduct in authorizing the FISA surveillance at issue in the joint congressional investigation makes him a fact witness central to the ongoing investigation of potential FISA abuse,” the articles state. “Deputy Attorney General Rosenstein’s failure to recuse himself in light of this inherent conflict of interest and failure to recommend the appointment of a second Special Counsel constitute dereliction of duty.”

Rosenstein named Special Counsel Robert Mueller to lead the Trump-Russia probe after Rosenstein’s boss, Attorney General Jeff Sessions, recused himself from the investigation because of Sessions’ own role in the Trump campaign. 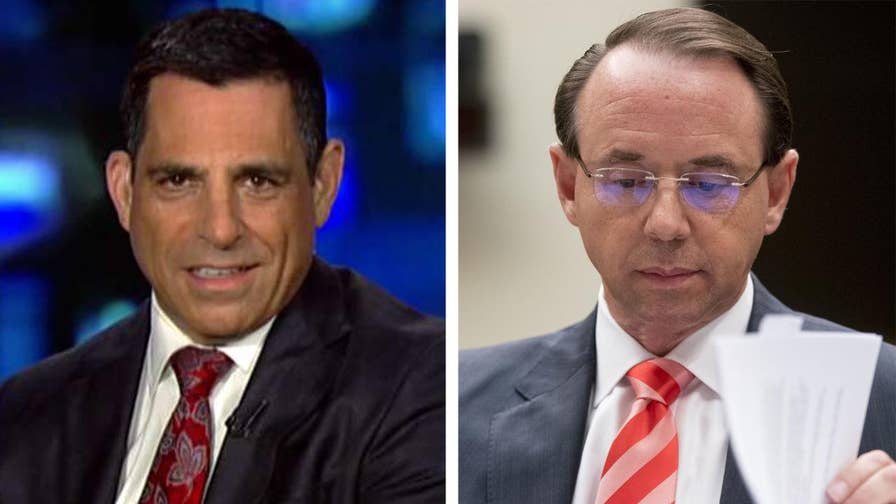 He has since clashed with House Republicans for months over requests for Department of Justice documents. GOP leaders grilled Rosenstein at a hearing in June for what they called his inadequate transparency.

In recent weeks, calls by top Republicans to remove Rosenstein grew louder. A simple majority of the House would suffice to impeach Rosenstein, but a two-thirds vote of the Senate would be required to remove him.

Last month, House Oversight Committee Chairman Trey Gowdy told “Fox News Sunday” that House Speaker Paul Ryan led a meeting with senior members of the DOJ and FBI, and made it clear that “there’s going to be action on the floor of the House this week if FBI and DOJ do not comply with our subpoena request.”

Gowdy, R-S.C., said the GOP’s action could involve “the full panoply of constitutional weapons available to the people’s house.”

Chad Pergram, Catherine Herridge, and Gregg Re contributed to this report. This is a developing story; check back for more updates.