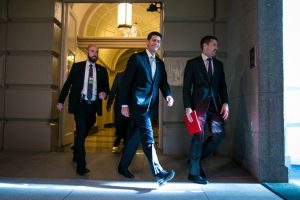 The House on Thursday passed a sweeping tax bill largely along party lines that makes good on a Republican campaign promise to reform the country’s tax code.

But the future of the Senate version, which includes a repeal of ObamaCare’s individual mandate, is still very much up in the air.

While the “Tax Cut and Jobs Act” was pitched as a plan to help middle income Americans, the final version scaled back many popular deductions while cutting the corporate tax rate to 20 percent from 35 percent. It also collapsed tax brackets to four from seven.

Republicans aggressively marketed their plan as something that would benefit everyone but critics said much of the financial gains would go to the wealthiest Americans and big corporations.

New York Rep. Pete King, one of the most ardent opponents of the proposal, called the House bill “an unforced error,” and suggested it could come back to bite Republicans in next year’s midterm elections.

Ahead of the vote, House Minority Leader Nancy Pelosi slammed it as “a tax hike on 36 million middle class familiar that is dead on arrival in the Senate.”

The Senate version, which is working its way through the Finance Committee this week, is facing a lot of obstacles, including pushback from GOP senators.

Earlier Thursday, President Trump visited Capitol Hill to meet with House Republicans ahead of the vote.

“He told us that we have this once-in-a lifetime opportunity to do something really bold, and he reminded us that is why we seek these offices,” Rep. Steve Womack, R-Ark., said of Trump’s closed-door pep rally. “And here we are on the cusp of getting something really important done.”

Some House Republicans spoke warily of what might happen to the tax bill in the Senate.

“Political survival depends on us doing this,” said Rep. Kevin Cramer, R-N.D. “Frankly, one of the things that scares me a little bit is that they’re going to screw up the bill to the point we can’t pass it.”

Both bills would nearly double the standard deduction to around $12,000 for individuals and about $24,000 for married couples and dramatically boost the current $1,000 per-child tax credit.

Each plan would erase the current $4,050 personal exemption and annul or reduce other tax breaks. The House would limit interest deductions to $500,000 in the value of future home mortgages, down from today’s $1 million, while the Senate would end deductions for moving expenses and tax preparation.

Fox News’ Barnini Chakraborty and The Associated Press contributed to this report.