Notice: Function add_theme_support( 'html5' ) was called incorrectly. You need to pass an array of types. Please see Debugging in WordPress for more information. (This message was added in version 3.6.1.) in /home/kj8d9sfz7jzn/public_html/federalistpress.com/wp-includes/functions.php on line 5831
 Hundreds of Christians Clash with Pakistani Police after Homes Burned by Muslim Mob

LAHORE, Pakistan –  Hundreds of Christians protesting the burning of their homes by a Muslim mob over alleged blasphemous remarks made against the Islam’s Prophet Muhammad clashed with police on Sunday in eastern and southern Pakistan.

Around 150 people have been arrested for setting dozens of Christian houses on fire in the eastern city of Lahore after a non-Muslim was accused of making offensive comments about the prophet, police said. 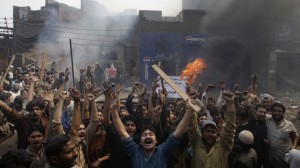 Christians across the country rallied against the incident, but the main demonstrations were in Lahore, the southern port city of Karachi, the capital, Islamabad, and the adjoining city of Rawalpindi.

The Christian demonstrators blocked a main highway in Lahore and police fired tear gas shells to disperse the protesters who demanded assistance from the government, said police official Malik Awais. He said the protesters damaged several vehicles, uprooted a fence along the road and burned an electricity generator.

Seven policemen were injured when the protesters pelted them with stones, he said. He said the police, who used tear gas and batons to disperse the crowd, detained six of the protesters.

Government spokesman Pervaiz Rasheed promised the government would help hem rebuild their houses, but the Christians expressed dissatisfaction with the way the government was handling the incident.

“I have been robbed of all of my life’s savings,” Yousuf Masih said, standing close to his burned house. He said the government’s announcement that it would give 200,000 rupees ($2,000) compensation to each family was a joke.

In Karachi, more than 1,000 protesters blocked a road in a main market and damaged about 25 vehicles, said police officer Ali Raza. He said some of the protesters also attacked 10 shops and looted valuables and cash. He said the police beat back the protesters and fired tear gas shells to disperse them. At least two protesters were taken into custody, he said.

The protests are a response to an incident that began on Friday after a Muslim accused a Christian man of blasphemy — an offense that in Pakistan is punished by life in prison or death. On Saturday, a mob of angry Muslims rampaged through the Christian neighborhood in Lahore, burning about 170 houses.

The Christian man is in police custody pending an investigation into the allegations. Those who rioted are being investigated for alleged arson, robbery, theft, and terrorism, said police officer Abdur Rehman.

The Pakistani police usually arrest rioters to tamp down public anger, but those accused are rarely convicted and the law is often misused to settle personal disputes and rivalries.

Akram Gill, a local bishop in the Lahore Christian community, said the incident had more to do with personal enmity between two men — one Christian and one Muslim — than blasphemy. He said the men got into a brawl after drinking late one night, and in the morning the Muslim man made up the blasphemy story as payback.

Such accusations of blasphemy in the past have prompted huge crowds to take the law into their own hands. Once an accusation is made it’s difficult to get it reversed, partly because law enforcement officials and politicians do not want to be seen as being soft on blasphemers.

According to Human Rights Watch, there are at least 16 people on death row in Pakistan for blasphemy and another 20 are serving life sentences.

Last year, there was a rare reversal of a blasphemy case. A teenage Christian girl with suspected mental disabilities was accused of burning pages of the Quran. But she was later released after a huge domestic and international outcry about her treatment. A local cleric where she lived was arrested and accused of planting the pages in her bag to incriminate her, a rare example of the accuser facing legal consequences. However, he was later freed on bail.

Also on Sunday, a suspected U.S. missile strike killed a foreign militant who was riding on horseback in Datta Khel in North Waziristan, according to three Pakistani intelligence officials who spoke anonymously because they were not authorized to talk to the media.