Notice: Function add_theme_support( 'html5' ) was called incorrectly. You need to pass an array of types. Please see Debugging in WordPress for more information. (This message was added in version 3.6.1.) in /home/kj8d9sfz7jzn/public_html/federalistpress.com/wp-includes/functions.php on line 5831
 ICE: Hundreds of Illegal Immigrants With Criminal Records Released 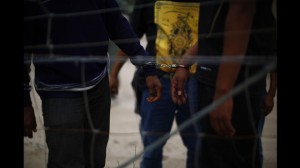 Hundreds of illegal immigrants with criminal records were released earlier this year as the Obama administration prepared for budget cuts, according to newly released data that challenged claims the program involved “low-risk” individuals.

Immigration and Customs Enforcement released the figures to two top senators, after a three-month delay and under the threat of congressional subpoenas.

Of the 2,226 detainees that were released in February, the department revealed, “622 have been identified as having some type of criminal conviction.”

A statement from Sens. John McCain, R-Ariz., and Carl Levin, D-Mich., who received the stats, said 32 of them had multiple felony convictions. The department then “re-apprehended” 24 of those, the senators said, after realizing the “seriousness” of their crimes.

McCain called for those responsible to be punished.

“ICE’s reprehensible actions put Arizona at risk by setting free into our communities hundreds of detainees who were guilty of criminal offenses,” he said. “The ICE officials responsible for this must face disciplinary action and must take all actions necessary to ensure that this never happens again.”

At the time, ICE officials defended the decision as one made in order to stay within budget — as a prior budget resolution expired and the sequester was set to kick in.

Those detainees released were still said to face deportation and be under supervision. But administration officials downplayed the threat they might pose after leaving the local immigration jails.

But according to McCain and Levin, some of those released had lengthy rap sheets.

One of them released in Phoenix had a second-degree robbery conviction and convictions for prostitution and solicitation for lewd conduct.

Another had been convicted of an “extreme” case of driving under the influence, harassment, and causing criminal damage to property. And yet another had prior convictions for carrying a gun, felony possession of drugs, burglary, vandalism and trespassing.

In the letter to the senators, a Department of Homeland Security official said detainees “without a criminal history were prioritized.”

Nelson Peacock, assistant secretary for legislative affairs, said ICE focused on those that “posed no significant threat to public safety.” He said 1,604 of those released had no known criminal convictions and reiterated that the agency faced a 7 percent budget cut which required “significant reductions.”

In a statement Thursday, ICE said “these decisions were made on a case-by-case basis, by career law enforcement officials in the field, in order to ensure that ICE maintained sufficient resources to detain serious criminal offenders and other individuals who pose a significant threat to public safety through the end of the continuing resolution.”