Notice: Function add_theme_support( 'html5' ) was called incorrectly. You need to pass an array of types. Please see Debugging in WordPress for more information. (This message was added in version 3.6.1.) in /home/kj8d9sfz7jzn/public_html/federalistpress.com/wp-includes/functions.php on line 5831
 Iran’s Leader Threatens to Level Cities if Israel Attacks 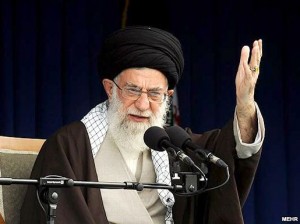 Iran’s leader said in a speech that the country would annihilate the Israeli cities of Tel Aviv and Haifa if it were attacked by Israel, and criticized the U.S. over nuclear talks.

The Supreme Leader Ayatollah Ali Khamenei, who has final say on all key decisions in Iran, says Israel is too small to be called an enemy, and that the United States is the “center of animosity” toward the Islamic republic.

“Sometimes, leaders of the Zionist regime threaten us. They threaten to take military action. They are not in the size to be put in the list of Iranian nation’s enemies,” Khamenei said in comments broadcast live on state TV.

In a strong warning to Israel, Khamenei said that if Israel attacked Iran, the “Islamic Republic will raze Tel Aviv and Haifa to the ground.”

He made the comments on Thursday to a crowd in northeastern Iran on the first day of the new Persian calendar year. His speech in the city of Mashhad was broadcast live on state radio.

Israel, which is believed to have the only nuclear weapons arsenal in the Mideast, has threatened to take military action against Iran if diplomacy fails to stop Iran’s alleged nuclear weapons program.

In the speech, Khamenei said he’s not opposed to direct talks with the U.S. to resolve its nuclear standoff with the West.

But he added that he’s not optimistic that such talks would yield results unless Washington stops imposing sanctions against the Islamic Republic.

“The Americans constantly send messages to us through various ways, saying let’s hold (bilateral) talks on the nuclear issue,” Khamenei said. “I’m not optimistic on these talks. Why? Because our previous experiences show that dialogue, in the logic of American gentlemen … means let’s sit down and talk so that you (Iran) accept our views. This is not dialogue. This is imposition and we won’t give in to it.”

Iran is living under stepped-up Western sanctions that include a total oil embargo and banking restrictions that make it increasingly difficult for Iran’s Asian customers to pay for oil deliveries. Iran’s income from oil and gas exports has dropped by about 50 percent as a result of sanctions.

Khamenei said the U.S. has sent messages to Tehran, sometimes in writing, saying it is willing to hold bilateral talks with Tehran separately from the negotiations Iran is holding with five permanent members of the U.N. Security Council plus Germany.

“I’m not optimistic about these talks, but I’m not opposed to it either,” he said.

However, Khamenei said the best way to resolve the standoff would be for the West to recognize Iran’s right to enrich uranium and agree to a monitoring process to ensure that it won’t be used for weapons.

“Iran only wants that the world recognize its enrichment right which is its natural right,” he said.

Khamenei said there is no reason why Tehran should trust the U.S. when Washington doesn’t trust Tehran.

“We have repeatedly told you that we are not after nuclear weapons. You say you don’t believe us. Why should we believe you? When you are not ready to accept an honest and logical remark, why should we accept your words that have been disproved many times?” he asked.

Khamenei alleged that the U.S. wants the nuclear issue to remain unresolved so it will continue to have basis for the sanctions, which he said have harmed, but not crippled the Iranian economy.

“Our economy suffers from the problem of being dependent on oil,” he said. “We have to distance our economy (from oil dependence).”

Published March 21, 2013 / FoxNews.com / The Associated Press contributed to this report.