Notice: Function add_theme_support( 'html5' ) was called incorrectly. You need to pass an array of types. Please see Debugging in WordPress for more information. (This message was added in version 3.6.1.) in /home/kj8d9sfz7jzn/public_html/federalistpress.com/wp-includes/functions.php on line 5831
 Is Romney’s Religion a Problem? 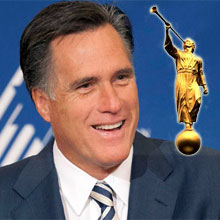 Although most political commentators seem to agree that Republican presidential candidate Mitt Romney’s Mormon faith is an off-limits issue in the campaign, there is a definite undercurrent that it could become problematic for him, perhaps in the Christian-fundamentalist “Bible Belt,” or especially if the Democratic media hit squads ignore the “faith” advice of cooler heads and decide to begin strafing the nominee on their own. The backlash risk is one they seem more willing to take with each passing week.

Is the faith of a candidate really an issue that can, or should be considered when deciding fitness for office? In fact, if a belief system takes its possessor too far afield from the beliefs of the average American voter, then it can have an impact (“I was born a snake handler, and I’ll die a snake handler!” Moe Szyslak).

The truth is that the subject of religious faith is of itself a minefield, and must be gingerly navigated under the best of circumstances. Even among those who consider themselves to be  Christian, the traditional majority religion of our nation, serious doctrinal divisions exist between the various denominations, and were we to begin throwing epithets at every Christian church that believes differently than our own, a bloody civil war would be the inevitable result.

It used to be that the Mormon Church (The Church of Jesus Christ of Latter-day Saints—or LDS for short) was thought by some to be non Christian, or a cult. Indeed, a review of the literature of “competing” churches reveals that many Christian ministries in the Bible Belt launched massive campaigns against the LDS faith, printing millions of tracts warning their parishioners not to talk to the Mormons. In retrospect it appears that this assault had more to do with massive numbers of their congregations converting to the LDS faith than actual cult or non Christian beliefs. The LDS Church is now the 4th largest Christian denomination in the U.S., and most of those converted from other Christian churches. In the 19th Century American Christian mobs likewise persecuted the early Mormons, murdering them and their leaders, stealing their land and property, raping their wives and daughters, and finally driving them out of the country into the far west where they settled, and built an empire. It was not America’s finest hour.

So what are some aspects of Mormonism that give pause to some Christian ministers? Are there Mormon doctrines that are repugnant to Biblical teachings? As all may know, theology is often a matter of biblical interpretation. For instance, in Roman Catholic theology (the largest American Christian denomination with nearly 70 million members), the doctrine of transubstantiation tells us that in the Eucharist, the substance of wheat bread and grape wine changes into the substance of the body and the blood of Jesus Christ, literally, not figuratively, while all that is accessible to the senses remains unchanged. Is this doctrine true? Does the wheat wafer actually, literally become the physical body of Jesus Christ, the crucified and resurrected Savior? Does the wine actually and literally become the physical blood of Christ? Do Catholics truly eat Christ’s body, and drink his blood during the Eucharist? I do not speculate about the accuracy of the doctrine, but it does set the benchmark by which we can measure the doctrines of other Christian churches, even the LDS Church. Faith is personal, and because it deals with matters that come to individuals spiritually, we are hard pressed to judge their reality until they come to us as well.

The editors have used some very conventional tools to survey the tenets of the LDS religion. We have also checked these tenets against biblical teachings.

Are these beliefs biblical? Despite any personal interpretations, we are hard-pressed to find doctrines that are alien or repugnant to the holy writ. Others may interpret biblical passages differently than the Mormons at times, but all the doctrines are present in the Bible. We could even say that the doctrine of transubstantiation is present in the Bible, if one accepts the Catholic interpretation of the Eucharist: “And as they were eating, Jesus took bread, and blessed it, and broke it, and gave it to the disciples, and said, Take, eat; this is my body.” Matthew 26:26