Notice: Function add_theme_support( 'html5' ) was called incorrectly. You need to pass an array of types. Please see Debugging in WordPress for more information. (This message was added in version 3.6.1.) in /home/kj8d9sfz7jzn/public_html/federalistpress.com/wp-includes/functions.php on line 5831
 Islamic Terror Attack in Manhattan Kills 8, Injures 9; Suspect in Custody

At least 8 people are dead after a driver barreled into a bike path and crashed a rental pickup truck into a crowd in Lower Manhattan Tuesday afternoon, shouting “Allahu Akbar,” law enforcement sources tell Fox News and The Associated Press.

Another nine people were injured, authorities said. Police tweeted that one person — who police shot twice — has been taken into custody and is expected to survive. Police added that there are “no others outstanding.”

The NYPD is responding to reports of a shooting in Lower Manhattan Tuesday, a few blocks from the World Trade Center Memorial.  (New York Police Department)

FBI officials confirmed to Fox News that they have agents responding to the situation “with NYPD.” A bomb squad is also on scene examining a vehicle.

A law enforcement source said the suspect had two weapons, believed to be a paintball gun and a B.B. gun. 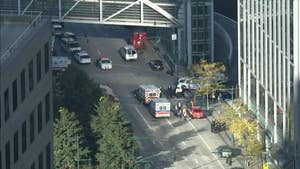 Mayor Bill de Blasio has been briefed on the situation, and is at the scene. The mayor’s press secretary tweeted there was “NO active threat.”

Governor Andrew Cuomo tweeted he has “been briefed with preliminary information on the situation in Lower Manhattan and am heading to the scene.”

One witness who passed the scene while on the West Side Highway said he saw several peple bleeding on the ground and a truck hit several people. Another witness told The Associated Press the truck had collided with a small bus and another vehicle.

A school photographer nearby said he peeked around the corner, where he saw a thin man in a blue track suit running and holding a gun. He claimed he saw a heavier man chasing after him.

Fox News’ Jake Gibson and Rick Leventhal and The Associated Press contributed to this report. This is a developing story. Check back for updates.