Notice: Function add_theme_support( 'html5' ) was called incorrectly. You need to pass an array of types. Please see Debugging in WordPress for more information. (This message was added in version 3.6.1.) in /home/kj8d9sfz7jzn/public_html/federalistpress.com/wp-includes/functions.php on line 5831
 Issa subpoenas Benghazi Probe Co-Leader 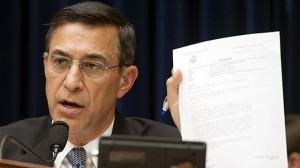 A top House Republican has subpoenaed the co-chairman of the Obama administration’s internal review board for the Benghazi attack — escalating his own inquiry amid a report that showed administration officials expressing regret about their response the night of Sept. 11.

Rep. Darrell Issa, R-Calif., announced Friday that he issued the subpoena to retired veteran diplomat Thomas Pickering to force him to appear at a deposition next week. Pickering, who co-chaired the Benghazi Accountability Review Board with a former Joint Chiefs of Staff chief Mike Mullen, has offered to testify before Issa’s committee in public. But Issa said a closed-door meeting is needed first in order for the committee to fully understand how the review board conducted its investigation.

“The ARB worked behind closed doors,” Issa wrote. “It did not record its interviews. No transcripts of ARB interviews exist. Even now, months after the ARB report was released, the ARB’s investigative process has remained opaque.”

The action made clear that Republicans who have been hounding the administration for information on the attack would not let up, despite the release of 100 pages of internal administration deliberations from the days immediately following the attack.

in which unnamed officials expressed regret about a decision on Sept. 11 not to send a counterterror unit known as the Foreign Emergency Support Team.

Fox News has previously reported that the administration decided not to send the unit to Benghazi. It would not have been deployed to repel the fighting, but could have been used to secure the scene in the aftermath. Ultimately, they were not sent, the scene was compromised and it took the FBI weeks to get there.

“We’re portrayed by Republicans as either being lying or idiots,” one Obama administration official told CBS News. “It’s actually closer to us being idiots.”

Another said “I wish we’d sent” the FEST.

Issa, chairman of the House Oversight and Government Reform Committee, said in his letter Friday that he found it “necessary” to issue the subpoena as he seeks more information. He said he would consider lifting the subpoena for next Thursday’s deposition if Pickering agreed to show up on his own.

Issa complained that prior to a public hearing about Benghazi that he chaired last week, Pickering had refused to speak with him and other members of the committee.

Issa is one of several GOP lawmakers who have suggested the Obama administration is trying to cover up the circumstances and aftermath of the Sept. 11, 2012, attack on the Benghazi outpost that killed the U.S. ambassador to Libya and three other Americans.

The review board convened by then-Secretary of State Hillary Clinton was critical of the State Department, blaming systematic leadership and management failures at senior levels for inadequate security in Benghazi. It made 29 recommendations to improve matters, and the State Department has vowed to implement all of them.

Issa said numerous questions about the review board’s report remain unanswered, including its methodology. He noted that the ARB conducted its work in secret and appears not to have recorded or transcribed its interviews with witnesses.

Published May 17, 2013 / FoxNews.com / The Associated Press contributed to this report.