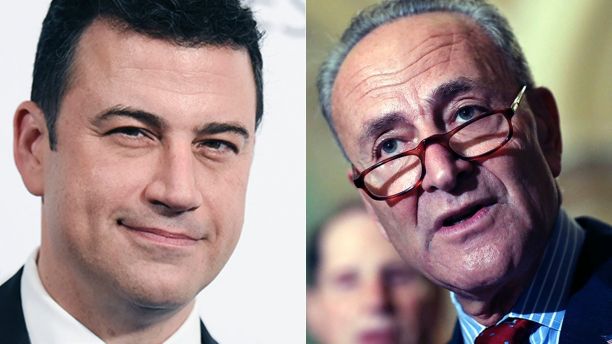 Late-night host Jimmy Kimmel got talking points from Senate Minority Leader Chuck Schumer, D-N.Y. as he prepared a series of monologues attacking the latest Republican effort to repeal ObamaCare, according to a report published Friday.

The Daily Beast reported that Schumer’s office “provided technical guidance and info” about the so-called Graham-Cassidy bill, as well as “stats from various think tanks and experts” on the bill’s effects.

“Jimmy wanted to learn more about what was going on politically and policy-wise,” The Daily Beast quoted a source as saying, “[and] he wanted to fight this thing.”

The host of ABC’s “Jimmy Kimmel Live,” repeatedly attacked the bill and one of its co-authors, Sen. Bill Cassidy, R-La., over three episodes this week. At one point, Kimmel claimed that Cassidy had “lied to my face” when the senator appeared on the show to discuss health care.

“He’s only heard from those on the left who are doing their best to preserve ObamaCare,’ Cassidy went on. “He’s not heard from me, because we’ve not spoken.”

There was no immediate comment on the report from Schumer or Kimmel, who took to Twitter Friday afternoon to praise Sen. John McCain, R-Ariz., for announcing his opposition to the bill.

Kimmel catapulted himself to the forefront of the debate over public health in America this spring when he discussed his son’s heart condition in an emotional monologue.

McCain’s opposition deals a major blow to Republican hopes of passing the bill, which Senate leaders were hoping to bring to the Senate floor next week.