Notice: Function add_theme_support( 'html5' ) was called incorrectly. You need to pass an array of types. Please see Debugging in WordPress for more information. (This message was added in version 3.6.1.) in /home/kj8d9sfz7jzn/public_html/federalistpress.com/wp-includes/functions.php on line 5831
 Jimmy Obama 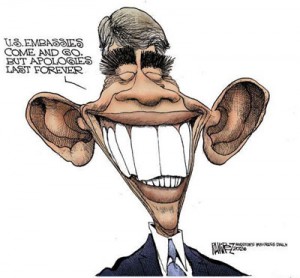 President Jimmy Carter promised Hope and Change to an America dragged through the mud by a media feeding frenzy during the Nixon Watergate era.

The left got the white house handed to them, along with the congress, and nothing could stop the wholesale implementation of liberal-progressive policies. Anyone who lived during the Carter administration knows that it was a horrific time in American history.

Carter began his presidency by apologizing for American success, and it wasn’t long before Islamic extremists began slapping him around like the whimp he told them he was.

OPEC decided the US was powerless to oppose them, and they immediately began cutting oil supplies and raising prices. Carter’s response was classic Democrat, demonstrating a complete lack of understanding of global free markets–impose price freezes on gasoline in the US. World oil markets naturally sought out the more lucrative markets and we well recall the gas lines stretching for blocks as Americans waited for hours to get their tanks filled, reminiscent of the Depression Era 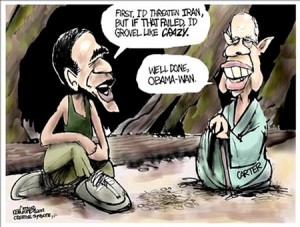 In grand Neville Chamberlain style Carter immediately tried diplomatic talks with the Soviet Union feeling that thrill going up his leg as the Soviets put their signatures on pieces of paper with him. Of course, while agreeing to limit expansion, the USSR invaded Afghanistan behind his back, bitch-slapping the president of the United States in front of the entire world.

Carter also withdrew US support of the Shah of Iran, historically a strong U.S. ally in the Middle East, one of few who recognized Israel as a sovereign state. Without our support the Shah was forced into exile, replaced by a fundamentalist government, hostile to the U.S. Iranian students stormed the US embassy and took 53 Americans hostages, and held them as political prisoners for 444 days. Carter had been paring back the US military and saw his duty as Commander in Chief as unbecoming a Progressive President, and when it was time to send in a military extraction team to get our hostages out, the equipment failed in one of the greatest military blunders in history. The hostages 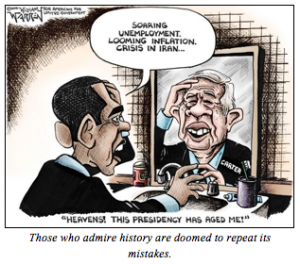 were kept in Iran and paraded before the world media up until President Elect Ronald Reagan sent Iran the message, “Let my people go,” and they were brushed up and sent back immediately.

Carter, the Apologizer in Chief, also gave up US control of the American-built Panama Canal, affording China and other nations greater access to our easier trade routes, further harming US trade superiority. Seeing no deterrence, the Soviets further expanded their influence in the Western Hemisphere by helping leftists overthrow governments in Central and South America.

Democratic economic strategies had our US economy spiraling in a tailspin, with the prime rate at 21 percent, killing business expansion and the housing market. Of course, unemployment skyrocketed under these circumstances. 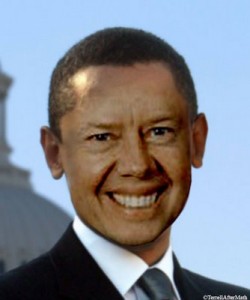 DOES ANY OF THIS SOUND FAMILIAR?

The editors have always said that American politics has been reduced to this: The Democrats take control of government based on promises of throwing a big party, and the next morning the Republicans are called in to clean up the mess.

At what point will America wake up to the reality that the policies of the left don’t work? How many of our embassies will be stormed and our faithful diplomats killed? It’s time to install a conservative government, and to keep a conservative government in place . . . and replace the long-term growth, development and expansion of personal liberty that we enjoyed for the first 100 years. Call me old fashioned.