Notice: Function add_theme_support( 'html5' ) was called incorrectly. You need to pass an array of types. Please see Debugging in WordPress for more information. (This message was added in version 3.6.1.) in /home/kj8d9sfz7jzn/public_html/federalistpress.com/wp-includes/functions.php on line 5831
 Kim Jong Un to Start Denuclearization ‘Virtually Immediately’

President Trump, on the heels of his historic summit with Kim Jong Un, told Fox News’ Sean Hannity that he believes the North Korean leader will begin to work toward dismantling his country’s nuclear program “virtually immediately.”

The president left Singapore after the two leaders signed a document stating Pyongyang would work toward “complete denuclearization of the Korean Peninsula.”

In an interview with Fox News, Trump said the process is “really moving rapidly.”

“I just think that we are now we are going to start the process of denuclearization of North Korea, and I believe that he’s going back and will start it virtually immediately – and he’s already indicated that and you look at what he’s done,” Trump said.

Chairman of the DPRK Kim Jong Un, left, meets with President Trump, right, at the Capella Hotel on Sentosa Island in Singapore on June 12, 2018. (AP)

The historic agreement came after the two leaders held several meetings throughout the day. Trump was asked by a reporter if Kim agreed to denuclearize and he said, “We are starting that process very quickly.”

Trump said at a press conference that he will be ending joint military exercises between the United States and South Korea.

He also said Kim agreed to destroy a “major” missile testing site, but did not offer specific details.

The joint declaration states that the U.S. has committed to providing “security guarantees” to Pyongyang.

Whether the unpredictable North Korean leader will follow through remains unclear, but Trump sounded optimistic as he left the summit. He told “Hannity” the two of them “got along from the beginning” and Kim understood the need to dismantle his nuclear program.

The summit, which almost didn’t happen, represented a remarkable turnaround from the tension between Washington and Pyongyang last summer when Trump and Kim exchanged a war of words, with the American president warning the dictator of “fire and fury.”

Trump told Fox News, though, that “without the rhetoric we wouldn’t have been here.”

“So I think the rhetoric, I hated to do it, sometimes I felt foolish doing it, but we had no choice,” he said.

As for what happens next, Trump insisted, “I think he’s gone back to get this done. He wants to get it done.” 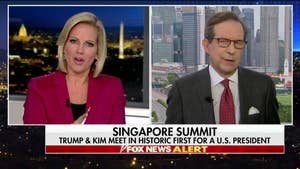 Wallace: Definition of ‘Denuclearization,’ Timetable of Sanctions Relief Could Be Sticking Points

During a gaggle later in the day with reporters on Air Force One, Trump said he trusts Kim but the U.S. would have to “check” to ensure denuclearization occurs.

“We’re going to have to check him. And we will check him, we’ll check him very strongly. But he has a plan total and complete,” Trump said. “He’s got a total plan. It will get done.”

When asked whether he had any concerns about Kim, the president insisted Kim “wants to get it done.”

He added: “And we should all want that to happen.”