Supporters of comprehensive gun control legislation are ratcheting up pressure on wavering lawmakers, trying to clear the way for Senate Democratic Leader Harry Reid to proceed with a bill in the face of mounting roadblocks from conservative members. 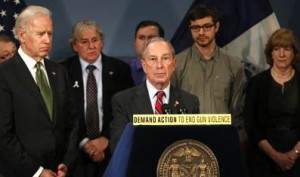 At least 14 Republican senators have threatened to filibuster the firearms legislation, complaining that it would curb the rights of the law-abiding while doing little to reduce crime. “The more people learn about the consequences of current gun control proposals, the less they will support the new restrictions,” Sen. Mike Lee, R-Utah, said.

If Lee and his colleagues succeed, their objections would require any bill to garner 60 votes, a heavy lift for Reid and the White House.

But as negotiations continue on a compromise measure that could sway moderate hold-outs, powerful advocacy groups are rolling out new ads and campaigns to win them over.

Family members of the victims of the Sandy Hook mass shooting are in Washington through Thursday to meet with senators on both sides of the aisle and lobby for legislation. After flying back from an event with President Obama on Air Force One Monday night, the family members plan to hold a conference call Tuesday afternoon. They are calling for universal background checks, limits on high-capacity magazines and tougher gun trafficking laws.

Separately, New York Mayor Michael Bloomberg’s group Mayors Against Illegal Guns reportedly is launching a scoring system Tuesday to give lawmakers a letter grade on their gun control stances. According to The Washington Post, this will be similar to what the National Rifle Association does in scoring lawmakers’ gun-rights positions.

“For decades, the NRA has done an admirable job of tracking to minute detail how members of Congress stand on gun bills. We’ve simply decided to do the same,” Mark Glaze, director of Mayors Against Illegal Guns, told the Post.

These groups are targeting moderate lawmakers seen as pliable on the issue of gun control. The new efforts come after the legislation appeared to be losing momentum. First, Reid dropped a renewed ban on assault weapons and high-capacity magazines from the main bill — though they could still get a vote as an amendment. Then, senators began to clash over the issue of universal background checks.

On the sidelines, West Virginia Democratic Sen. Joe Manchin and Pennsylvania Republican Sen. Pat Toomey are now discussing a possible compromise proposal on the checks, which could serve to assuage gun-rights supporters’ concerns about the new system encumbering casual transactions among family members and fellow hunters.

Reid has not yet moved to call a vote on the package. The earliest a vote could happen is most likely Thursday.

Obama criticized the proposed filibuster during a campaign-style event at the University of Hartford in Connecticut about 45 miles from the elementary school where 20 first-graders were shot and killed in December.

“Some back in Washington are already floating the idea that they might use political stunts,” said Obama, who was introduced by Nicole Hockley, whose son, Dylan, was one of the victims. “They’re not just saying they’ll vote ‘no’ on ideas that almost all Americans support. They’re saying they won’t allow any votes on them at all.”

Many in the crowd responded by chanting: “We want a vote.”