Notice: Function add_theme_support( 'html5' ) was called incorrectly. You need to pass an array of types. Please see Debugging in WordPress for more information. (This message was added in version 3.6.1.) in /home/kj8d9sfz7jzn/public_html/federalistpress.com/wp-includes/functions.php on line 5831
 Liberal Terrorist Attack In DC 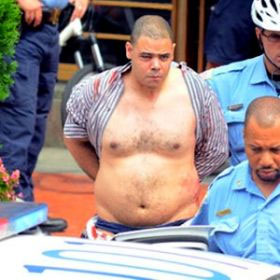 America gets a good look at the face of tolerance. Yesterday a heavily armed liberal terrorist associated with the LGBT movement made his way into the headquarters of the pro-family, pro-life organization, Family Research Council (FRC), and opened fire when challenged by unarmed building operations manager, Leo Johnson.

Floyd Lee Corkins, a 28 year old volunteer affiliated with The DC Center for the LGBT Community, reportedly exclaimed, “I don’t like your politics,” before pulling his semi-automatic weapon from his backpack and shooting Johnson. Although Johnson was hit in the arm, he still attacked the terrorist and wrestled him to the ground and disarmed him before Corkins could gain access to the areas where dozens of FRC employees and volunteers worked. Corkins cried at that point, “Don’t shoot me, it was not about you, it was what this place stands for.”

Leo Johnson is a hero for disarming the terrorist before he could carry out his mandate, force-feeding bullets and Chick-fil-A sandwiches to those who have the audacity to speak up for traditional morals and pro-family matters in America. Liberal groups like the Southern Poverty Law Center had recently dubbed the Family Research Council a “hate group,” which leftists call anyone who disagrees with their radical views.

Mainstream news outlets are doing their best to bury the story that one of their own has launched a terrorist attack on a peaceful, family centered organization just blocks from the White House.  He-Who-Must-Not-Be-Named has similarly had precious little to say about the attack. The FBI has officially indicated the attack a terrorist hate crime.

Presidential candidate Mitt Romney is the only candidate to express appropriate concern:”There is no place for such violence in our society. My prayers go out to the wounded security guard and his family, as well as all the people at the Family Research Council whose sense of security has been shattered by today’s horrific events.”

America will be watching to see if this attack, like many others that have been tolerated by the liberal mainstream media and those who currently but temporarily run our national government, will go unreported and undenounced.