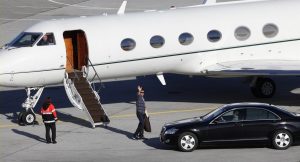 Let me tell you about a friendly Democrat family of three, who raised their son—“Matt”—to love and respect the environment. When Matt was a toddler, I remember joining the family for fajitas at the El Real Cafe when, upon seeing a waiter packing our leftovers in a Styrofoam container, Matt threw a fit for the ages, crying out that Styrofoam was bad for the environment.

On every occasion I’ve visited their home and have needed to throw away, for example, an empty beer bottle, I’m invariably reminded of their mantra, “We Recycle Here.” In short, Matt and his family are doing their small part in pursuit of a worthwhile goal; preventing global warming in particular, and helping the environment in general.

As it happens, there’s more to this story. Matt’s family has one enormous house located in a tony suburb of one of America’s largest cities, as well as another, even larger home in the countryside, both kept air-conditioned and de-humidified year-round. They drive the fanciest cars, eat at the fanciest restaurants, and stay at the fanciest hotels when they travel, which is often. I can’t say for sure if they buy carbon offsets, but my gut tells me they do. I’m also sure they believe the scientists who identify humans as the primary driver of global climate change, although I doubt they believe many of those same scientists who note that no amount of money can reverse it. 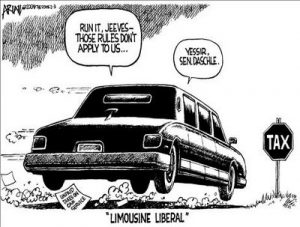 Discussing ethics with liberals can be tough. While they tend not to respond to arguments featuring universal truths such as those commonly found in the realm of religion, I’ve found a sure-fire way to start such a discussion with a liberal: namely, ask the age-old question, “What would happen if everyone did what you do?” For example, is shoplifting really that bad? Think about if everyone was a shoplifter. Is it unethical to keep multiple McMansions, swimming pools, and foreign luxury cars? Is flying on jumbo jets, eating at Michelin-star restaurants, and staying at luxury hotels unethical? Just ask what would happen if everyone could. In the most literal sense, what if the Earth’s seven billion people consumed as much food, fossil fuel, electricity, plastic, or anything else as does a typical wealthy liberal family? I don’t think it’s a stretch to say that if the masses in India or Vietnam could match that lifestyle, they would do so in a heartbeat.

Mahatma Ghandi, living in apartheid South Africa and frustrated at the unchristian behavior of his Christian contemporaries, famously said, “You Christians are so unlike Christ.” G. K. Chesterton made a similar observation, stating that the only indefensible argument against Christianity was Christians themselves.  It’s been noted time and again the disconnect between the Church of Christ in all its forms to Jesus’ humble and compassionate example.

A similar argument can be directed at modern liberals and the green movement, where the gulf between the Church of Climate Change and the example of its adherents has never been wider. Have you seen the polluted sites of their protests after they leave? To regain their credibility, liberal members of the Church of Climate Change need to look at themselves in the mirror and begin to lead by example. They need to ditch the small-scale changes and focus on the big ones—recycling bottles doesn’t help the environment to a significant degree, but refraining from buying bottled beverages does. Switching your electric company to “Green Mountain Energy” does not make the air cleaner, but turning off the electricity does.

Changes that actually matter. Simply put, the Church of Climate Change must pledge to never again fly in a jet, drive a luxury car, eat red meat, own a private swimming pool, water their lawns, or live in massive temperature-controlled homes. Even disavowing these, they will still live a more luxurious life than 98% of the world. What’s more, they will finally send a message to those who “deny” climate change science that they, the 57% of Americans believing in human-caused climate change, are willing to do their individual part in limiting emissions. 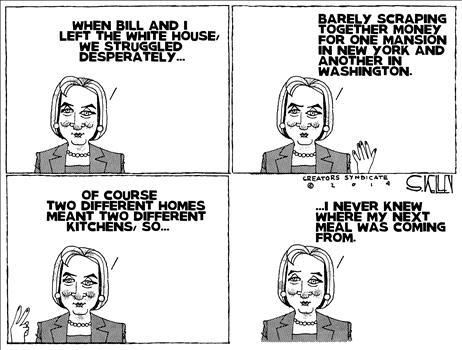 The use of parochial imagery here is no mistake: the “Church of Climate Change” is most certainly a church, based on a shared faith–a dogma really. Take for example one of its more obvious rituals, the annual “Earth Hour.” As part of the event’s solemn rites, residents in thousands of cities worldwide are encouraged to turn off their lights for 60 minutes, to express their solidarity with protecting the environment. Just as many religious rituals lack in substance and offer mostly show, Earth Hour is no exception, especially as highlighted by the example of Las Vegas which, after participating in the event in 2010, ended up using twice as much electricity to power-down and power-up its lights than would have been used otherwise.

Dogma. There is only a single culprit to blame for the environmental degradation espoused by the Church of Climate Change: human progress. In reality, if all seven billion humans on Earth were to live the American dream lifestyle of homes, cars, and Disneyworld, this entire planet would make modern-day Beijing and Bombay appear as appealing as the planet from Avatar.

So find your beloved liberal friends and ask them to take this simple pledge:

“From this day forward, I _________ will never again fly in plane, stay in a hotel, ride in a luxury automobile, live in a large house, or eat red meat. I will live in an efficiency apartment, and only exhale as much CO2 as is absolutely necessary. I will encourage fellow climate change believers to do the same, and together we will create a more verdant future for all.  Amen.”