Notice: Function add_theme_support( 'html5' ) was called incorrectly. You need to pass an array of types. Please see Debugging in WordPress for more information. (This message was added in version 3.6.1.) in /home/kj8d9sfz7jzn/public_html/federalistpress.com/wp-includes/functions.php on line 5831
 Liberals Set Feminism Back 50 Years in Weinstein Responses

Dem rep on Weinstein scandal: Women have ‘responsibility’ to watch their attire and behavior 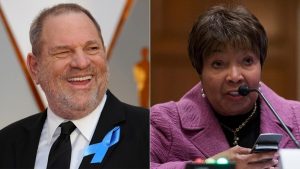 A Democratic congresswoman suggested in a local TV interview that women bear a certain “responsibility” when it comes to sexual harassment, saying their attire and behavior can be “inviting.”

Rep. Eddie Bernice Johnson, D-Texas, later sought to clarify her comments and explained they came from an “old-school”perspective.

But in the original interview with NBC 5 on Wednesday, Johnson ‘went there’ when asked to respond to the scandal over disgraced Hollywood producer Harvey Weinstein. She said that she was “disappointed” in the man who supported many of her Democratic colleagues, but that women should be mindful how they appear.

“I grew up in a time when it was as much the woman’s responsibility as it was a man’s – how you were dressed, what your behavior was,” Johnson said. “I’m from the old school that you can have behaviors that appear inviting. It can be interpreted as such. That’s the responsibility, I think, of the female.”

Johnson, a 13-term congresswoman and former chairwoman of the Congressional Black Caucus, added that men have a “responsibility to be professional themselves.”

“I think we also need to start talking about the power that women have to control the situation. There’s law enforcement, you can refuse to cooperate with that kind of behavior,” Johnson said. “I think that many times, men get away with this because they are allowed to get away with it by the women.” 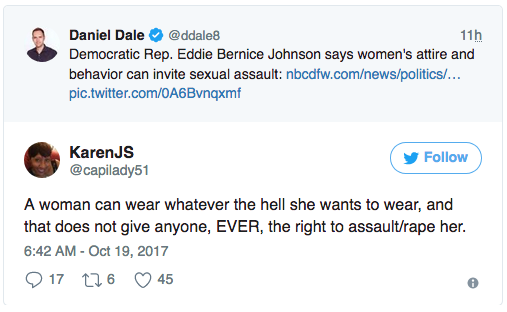 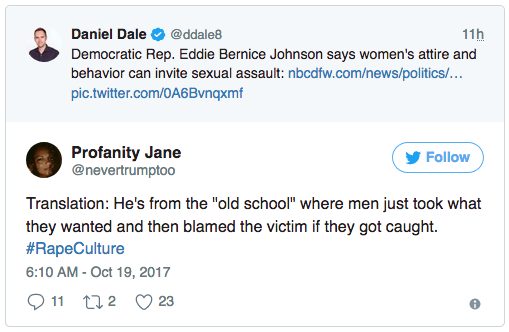 But when reached by Fox News for comment, Johnson later issued a detailed clarification, saying she does not “blame victims of sexual assault for the actions of their assailants.”

“Sexual assault and harassment has no place in our society. This is something I believe deeply. And at each turn of my professional life, I have made it my mission to fight for women’s rights. I do not blame victims of sexual assault for the actions of their assailants,” Johnson said. “I do acknowledge that my comments regarding behavior and attire come from an old school perspective that has shaped how some of us understand the issue, but that does not detract from the fact that criminals need to be held accountable for their actions.”

She continued, “I will never condone those who feel they can abuse the power of their positions to sexually assault and harass women, and I will always encourage victims to come forward so that we can hold these criminals accountable.”