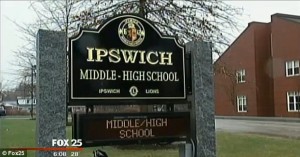 A Massachusetts principal has been criticized for canceling his school’s Honors Night, saying it could be ‘devastating’ to the students who worked hard, but fell short of the grades.

“The Honors Night, which can be a great sense of pride for the recipients’ families, can also be devastating to a child who has worked extremely hard in a difficult class but who, despite growth, has not been able to maintain a high grade-point average,” Fabrizio penned in his first letter to parents, the station reported.

Fabrizio also said he decided to make the change because academic success can be influenced by the amount of support a student  receives at home and not all students receive the same level of emotional and academic support at home.

Some parents disagree with his philosophy.

“It’s been a tradition in Ipswich, and you’re very proud as a parent to see your child, as well as some of the other children who made, really, some great efforts,” Dave Morin, a parent, told the station.

Fabrizio says he plans to include the honors ceremony with a previously planned end of the year assembly where students will be recognized in front of the entire student body.