Notice: Function add_theme_support( 'html5' ) was called incorrectly. You need to pass an array of types. Please see Debugging in WordPress for more information. (This message was added in version 3.6.1.) in /home/kj8d9sfz7jzn/public_html/federalistpress.com/wp-includes/functions.php on line 5831
 Mormon Bishop Protects Woman with a Samurai Sword 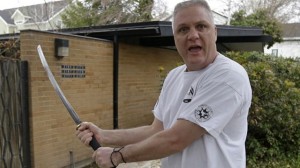 A Samurai sword-wielding Mormon bishop helped a neighbor woman escape a Tuesday morning attack by a man who had been stalking her.

Kent Hendrix woke up Tuesday to his teenage son pounding on his bedroom door and telling him somebody was being mugged in front of their house. The 47-year-old father of six rushed out the door and grabbed the weapon closest to him — a 29-inch high carbon steel Samurai sword.

Hendrix, a bishop in The Church of Jesus Christ of Latter-day Saints, said it was the first time in 30 years of practicing martial arts that he’s used the sword. He didn’t swing it at the man, only showing him he had it.

He came upon what he describes as a melee between a woman and a man. His son stayed inside to call 911 while he approached the man along with other neighbors who came to help. The martial arts instructor didn’t hesitate in drawing the sword and yelling at him to get on the ground.

‘He was staring down 29 inches of razor’ – Kent Hendrix

“His eyes got as big as saucers and he kind of gasped and jumped back,” Hendrix said by phone Tuesday afternoon. “As he was coming through the fence, this is where I drew down on him and told him to get down on the ground,” Hendrix told Fox13Now.com. He continued, “he was staring down 29 inches of razor.”

The man ran down the street with the barefoot Hendrix and others in pursuit. Hendrix said he couldn’t catch the man before he fled in his car, but he picked up ChapStick that the man dropped and memorized his license plate.

The suspect, 37-year-old Grant Eggersten, turned himself in to police an hour later, said Unified Police Lt. Justin Hoyal. He was booked on charges of robbery, attempted burglary, trespassing and violation of a stalking injunction.

Hendrix, a pharmaceutical statistician, was one of several neighbors who came to the woman’s aid after she began yelling for help, Hoyal said.

The incident began just after 7 a.m. when the 35-year-old woman came out of her front door, Hoyal said. Eggersten was hiding behind her carport and attacked her, knocking her to the ground, Hoyal said.

He took her keys and tried to open the door into her house, Hoyal said. That’s when the woman ran down the street calling for help.

The woman did the right thing by fighting back and calling for help, Hoyal said. She suffered minor injuries.

Hendrix, a bishop in The Church of Jesus Christ of Latter-day Saints, said it was the first time in 30 years of practicing martial arts that he’s used the sword. He didn’t swing it at the man, only showing him he had it.

He said he’s proud of his 14-year-old son for alerting him and quickly calling 911. He said the family is still abuzz about the events.

“That kind of thing doesn’t happen every day,” Hendrix said. “Our neighborhood is a pretty quiet place.”

A fourth-degree black belt in the Kishindo form of martial arts, Hendrix owns a collection of swords and weapons that he trains with, said his wife, Suzanne Hendrix. He has trained with the sword he used Tuesday for 20 years and keeps it by his bed.

“Some people have bats they go to,” said Hendrix. “I have my sword.”

Published April 23, 2013 / FoxNews.com /The Associated Press contributed to this report