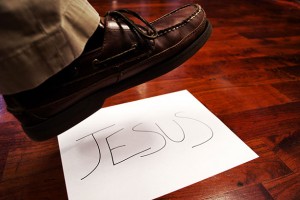 Florida Gov. Rick Scott is calling on the state university system chancellor to investigate a classroom lesson at Florida Atlantic University in which students were instructed to stomp on sheets of paper that had “Jesus” written on them.

“As we enter the week memorializing the events of Christ’s passion, this incident gave me great concern over the lessons we are teaching our students,” Scott wrote in the letter to Chancellor Frank Brogan. “The professor’s lesson was offensive, and even intolerant, to Christians and those of all faiths who deserve to be respected as Americans entitled to religious freedom.”

Scott said in his letter that he was “deeply disappointed” by the recent incident in an intercultural communications class taught by Deandre Poole, who also happens to be the vice chair of the Palm Beach Democratic party.

Ryan Rotela, a devout Mormon was in the classroom and refused to obey the instructor’s directions. When he complained, Rotela was banned from the classroom and charged with violating the student code of conduct.

After Rotela retained the legal services of the Liberty Institute, the university had a change of heart – profusely apologizing and promising to clear his record.

Scott said the incident raised questions about “the lessons being taught in our classrooms.” He said he wanted a report on the incident and how it was handled, as well as a statement of the university’s policies to ensure such “lessons” don’t occur again.

“The State University System prides itself not only on its commitment to academic freedom, but at the same time, its awesome responsibility to the people it serves,” she said in a written statement. “We are gratified to know that FAU has apologized for any offense the exercise has caused and has pledged never to use this exercise again. Clearly, there were things the university could have done differently by its own acknowledgement.”

“On behalf of all us here at FAU, we are deeply sorry for any hurt this incident might have caused our students, people in the community and beyond,” Brown said. “As an institution of higher education, we embrace academic freedom. but with that comes a level of responsibility which we did not uphold.”

Brown said the lesson would no longer be used at FAU.

“It was insensitive and deeply hurtful and we are deeply sorry,” he said.

The governor didn’t seem satisfied with the apology, saying it was “in many ways inconsequential to the larger issue of a professor’s poor judgment.”

“Our public higher educational institutions are designed to shape the minds of Florida’s future leaders,” Scott wrote. “We should provide educational leadership that is respectful of religious freedom of all people.”

By Todd Starnes / With reporting from Associated Press