Notice: Function add_theme_support( 'html5' ) was called incorrectly. You need to pass an array of types. Please see Debugging in WordPress for more information. (This message was added in version 3.6.1.) in /home/kj8d9sfz7jzn/public_html/federalistpress.com/wp-includes/functions.php on line 5831
 Mormons Should Not Lose Faith Because of Scientific Discoveries or Modern Philosophies 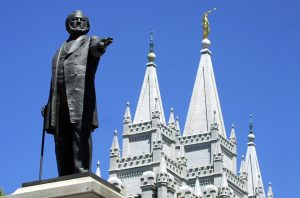 We see many members of the Church of Jesus Christ of Latter-day Saints struggling with their testimonies of the restored gospel of Jesus Christ these days. They are not alone; in an anti-Christ atmosphere of the past decade, Christianity has come under attack in most sectors, and young Mormons are as subject to the barrage of anti-Christian propaganda as any young Christian.

We see pseudo intellectual websites flooded with anti-Mormon propaganda, misrepresenting the faith’s doctrines and its leaders’ teachings and activities. I’ve looked into some of the prevailing attacks used by the Church’s enemies, and find them to be the same old tired recycled lies that have been circulated to harm the Church’s reputation since the earliest days of the boy Joseph Smith.

Personal friends and family members have come to me with questions about things they have read about the Church, its doctrines, its history, and its leaders; things that tend to put them in a very bad light. We discuss each attack individually, and go through it, to the satisfaction of the inquirer. The Church’s enemies have a short list of favorite ruses they like to circulate, and like wolves among the flock they take the younger, weaker members, and devour them with lies and deceit, leading their souls down unlit paths, finally wandering off into snares of various kinds. I have seen it often of late.

Let me tell the members of Christ’s Church that they need not fear what they don’t yet understand. Scientific theories and recent discoveries are likewise no reason to begin doubting the existence of your Father in Heaven, or of the divine nature of Jesus Christ, His exalted Son. Scientific theories come and go, and many of them are correct, while many are not. Humans just beginning to understand the nature of the universe, is no reason to begin doubting the existence of He who organizes it into galaxies and solar systems for the benefit of His children.

The Big Bang Theory is one of my least favorite areas of “science,” because it requires so much more faith to accept than any religious dogma, is unprovable with the scientific method, and is so unsupported by logic and inquiry as to be laughable. Yet every scientist must accept the theory as orthodoxy. Scientists who first considered the Big Bang theory of creation were quite reluctant to accept it as a theory because of its close kinship to creatio ex nihilo. According to the standard Big Bang theory, our universe sprang into existence as a ‘singularity’ around 13.7 billion years ago. This implies that a nonexistent universe suddenly and without provocation sprang into existence, growing instantly from a point only a small fraction of the size of an atom to the entire universe filled with all of its mass and matter in mere seconds. Honestly, the faith required to accept such an unsubstantiated, inconceivable theory as a workable model for the creation of the universe is beyond acceptability. The theory continues to experience tweaking and retooling due to incongruity with ‘the math.’ It doesn’t work. To make the math begin to conform to the theory, scientists have constructed a model that requires 95% of the universe to consist of “dark matter” and “dark energy.” In other words, scientists now mock Christians for their failure to believe in unseen worlds and forms of existence. Furthermore, any scientist who refuses to subscribe to this dogma is blacklisted, and not allowed to publish or teach. See Christians: Marked For Extinction?, March 12, 2014

The more I learn of quantum mechanics and the Higgs Boson particle, for instance, the better I come to understand the multi-dimensional nature of the universe, exactly as the prophets have described it for millennia. The probability of the existence of what we term the spirit world is greatly multiplied by these scientific discoveries. Although many would tell you it is the opposite. I am currently reading a book written by a law school acquaintance of mine, Henry J. Eyring, the son of our beloved President Henry Eyring. His well-written book, Mormon Scientist: The Life and Faith of Henry Eyring, chronicles the life of President Eyring’s father, who was a top scientist in the world at a time when scientific inquiry and understanding exploded exponentially. He developed scientific theories and standards that are fundamental today, relied upon by most chemists and scientists every day. His understanding of things spiritual was instrumental in breaking the hidden nature of the unseen world of quantum mechanics, and coming up with a working understanding of how particles constantly slip between dimensions, giving them their reactive nature and physical attributes. He was at Princeton with Einstein for nearly 15 years, and they changed the world’s understanding of the universe and how it works. Both men were believers in God, and Professor Eyring was well known for his frequent testimonials about the truthfulness of the restoration of the gospel through the prophet, Joseph Smith, and of the Book of Mormon, and the revelations, and the writings published in the Pearl of Great Price. There is much that science could learn from the prophets if they would simply recognize that truth is eternal, and applies universally, regardless of the discipline being studied.

To the wolves who are devouring the weak and sickly of the flock, I invite you to get a new hobby. What is it to you if people want to improve themselves and learn more about where they have come from, why they are here at this time on this planet, and what awaits us when we eventually go the way of all the world? If you don’t agree with what divine messengers have revealed to the prophets, and what the Holy Spirit reveals in quiet meditation and prayer, then move on to something else. We do not begrudge you your self-destructive lifestyle. Waste your life in alcoholism, drug abuse, impurity and self-satisfaction. Go into chat rooms and congratulate yourselves for your superior understanding and intellect. Choose whatever you want for yourselves. We simply ask that you allow us the same privileges that you enjoy. Stalking our children so that you can convert them to your atheism may bring you a degree of devilish satisfaction at some level, but in the long run, people like you often come to regret the wanton waste of their lives, and look upon those with families and love in their lives with profound envy.

Mormons–if the Prophet of the Lord reveals something to you that may seem at odds with what the women on The View say, or with the latest scientific theory, or some politically correct darling of the moment, don’t worry too much about it. The Lord sees the big picture, and I assure you that pundits do not. Live your lives. Live your religion. There is nothing wrong with remaining faithful to wives, husbands, children, neighbors, and God–no matter what the world may say. Turn away from the taunts and mocking of the great and spacious building, and turn back to the iron rod. This is the time to choose.

James Thompson is an LDS author, political commentator and ghostwriter. His article of October 24, 2016, Mormons Determined to Give White House to Clinton, and Supreme Court to Left, was read by hundreds of thousands of LDS people before the election and is credited with swinging Mormon states in the election.

Major New Study of Religion Has Much to Say About Mormons

The Alarming Truth Behind Anti-Mormonism

Watch the video about the book Enoch in the City of Adam–1 min.