Notice: Function add_theme_support( 'html5' ) was called incorrectly. You need to pass an array of types. Please see Debugging in WordPress for more information. (This message was added in version 3.6.1.) in /home/kj8d9sfz7jzn/public_html/federalistpress.com/wp-includes/functions.php on line 5831
 Muslim Terrorists Killed and Captured 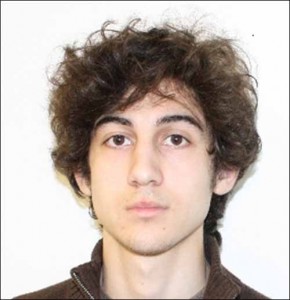 A day-long dragnet for the second of two brothers believed to be behind Monday’s Boston Marathon bombing ended Friday night, with police capturing the suspect covered in blood and hiding in a boat in the backyard of a man who called 911 after becoming suspicious of activity on his property.

“We got him,” Boston Mayor Tom Menino tweeted moments later, as neighbors gathered to form a gauntlet of cheers while a phalanx of police cars departed the scene.

Police moved in on Dzhokhar Tsarnaev Friday evening after a tip led them to the home on Franklin Street, where he apparently had been hiding in the back yard. Neighbors said they heard more than 30 shots one likened to “a roll of firecrackers shooting off.” Police swarmed the scene, and several explosions, possibly police concussion grenades, were heard after a robot moved in on the boat. Less than two hours later, at about 9 p.m., the suspect, believed to have been injured in a wild shootout that spanned Thursday night to Friday morning,  was being taken to Beth Israel Hospital.

No police were injured when shots were fired by the boat.

“We are so grateful to bring justice and to bring closure to this case,” Massachsetts State Police Col. Tim Alben said moments later, at a staging area set up down the block from the crime scene. “We have a suspect in custody.”

Sources told Fox News the shed and the boat had been searched earlier, but a local man noticed a door to it had been opened, saw blood on the tarp and called police.

“It was a call from a resident of Watertown,” Watertown Police Chief Edward Deveau said. “We got that call, and we got the guy.”

Boston Police Commissioner Ed Davis said Tsarnaev was in serious condition and was found “covered with blood.” He did not come out from inside the boat willingly, despite the efforts of negotiators, Davis said.

“We assume that those injuries came from the gunfire the night before,” Davis said. He also said Tsarnaev did not have any explosives with him when he was taken into custody.

The hiding place was found just moments after police said their hunt for Tsarnaev, one of two radical Muslim brothers suspected in Monday’s attack, had gone cold and urged people to “go about your business.”

“We are so grateful to bring justice and to bring closure to this case. We have a suspect in custody.” – Mass. State Police Col. Timothy Alben

Shortly after the capture was announced, Watertown residents poured out of their homes and lined the streets to cheer police vehicles as they rolled away from the scene.

“Tonight, our family applauds the entire law enforcement community for a job well done, and trust that our justice system will now do its job,” said the family of 8-year-old Martin Richard, who died in the bombing.

Early in the day, police told residents of several city neighborhoods, especially Watertown, to stay inside. School was canceled, bus and train service suspended and people were even told not to venture out for work. But those restrictions were lifted at the news briefing Friday night about 15 minutes before the gunshots were heard.

The boat Tsarnaev hid under was just outside the tight perimeter where Black Hawk helicopters patrolled the sky and police went door-to-door hunting for him, police said. Police say he and his older brother, Tamerlan Tsarnaev placed the deadly bombs, at least one of which was made from a pressure cooker packed with explosives and shrapnel, at the race, killing three and injuring more than 180. The sibling suspects are from Dagestan, a province in Russia

that borders Chechnya, but have been in the U.S. for as much as a decade..

On Thursday night, hours after the radicalized Muslims were fingered by the FBI and their images circulated around the world, they killed a Massachusetts Institute of Technology police officer and carjacked an SUV from a man who later escaped. The brothers led police on a chase through city streets that included a wild shootout that saw some 200 shots fired and the suspects hurling pipe bombs from the SUV. Bizarrely, police discounted earlier reports that the brothers had robbed a 7/11, saying although it had been robbed, and they had been caught on surveillance video, they were not the robbers. 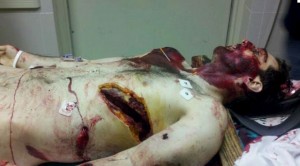 The pursuit went into Watertown, where Tamerlan Tsarnaev, 26, was shot several times in the gunfight. But Dzhokhar Tsarnaev somehow slipped away, running over his already wounded brother as he fled by car, according to two law enforcement officials who spoke to The Associated Press on condition of anonymity. Tamerlan Tsarnaev was pronounced dead at Beth Israel Hospital Deaconess Medical Center Friday morning. But at some point following the shootout and car chase, the younger brother fled by foot, according to State Police, who said Friday night they don’t believe he now has access to a car.

During the pursuit, a MBTA transit police officer was seriously injured and transported to the hospital, according to a news release. He was identified as Richard H. Donahue Jr., 33, and was at Mount. Auburn Hospital in critical but stable condition.

The suspects’ bloody rampage claimed the life of MIT Police Officer Sean Collier, 26, who was found shot to death in his squad car at 10:20 p.m. Thursday in what Davis termed a “vicious assassination.” Moments after the shooting, the brothers carjacked the Mercedes SUV from Third Street in Cambridge and forced the driver to stop at several bank machines to withdraw money. The driver later told police that the brothers had bragged to him that they were the marathon bombers, law enforcement authorities said.

It was when police were working to activate the tracking device on the stolen SUV, that other patrol officers spotted it in nearby Watertown, touching off the dramatic chase.

FBI Special Agent Rick Deslauriers said Friday night the FBI pored though thousands of tips, and chased down countless leads in the intense probe following the terror attack on Monday.

“The was a truly intense investigation,” Deslauriers said. “As a result of that justice is being served for each of the victims of these crimes.”