In its latest threat, North Korea says it’s entering a ‘state of war’ with South Korea, and promises to respond to any provocations by the United States and South Korea without ‘any prior notice.’ 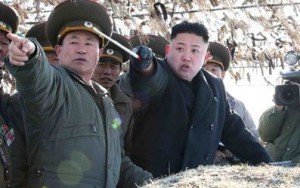 SEOUL, South Korea –  North Korea said Saturday it had entered “a state of war” with South Korea in its latest threat aimed at the United States and its ally after two American B-2 bombers flew a training mission in the region.

“From this time on, the North-South relations will be entering the state of war and all issues raised between the North and the South will be handled accordingly,” said a statement carried by the official North Korean news agency, according to a Reuters report.

The joint statement by the government, political parties and organizations said North Korea will deal with all matters involving South Korea according to “wartime regulations.” It also warned it will retaliate against any provocations by the United States and South Korea without “any prior notice.”

The divided Korean Peninsula is already in a technical state of war because the 1950-53 Korean War ended in a cease-fire, not a peace treaty. But Pyongyang said it was scrapping the war armistice earlier this month.

Reuters reported that North Korea’s statement said it would respond “without mercy” to any action by South Korea that harmed its sovereignty, indicating it was not about to mount a pre-emptive strike.

Analysts say a full-scale conflict is extremely unlikely and North Korea’s threats are instead aimed at drawing Washington into talks that could result in aid and boosting leader Kim Jong Un’s image at home. But the harsh rhetoric from North Korea and rising animosity from the rivals that have followed U.N. sanctions over Pyongyang’s Feb. 12 nuclear test have raised worries of a misjudgment leading to a clash.

South Korea’s Unification Ministry released a statement saying the latest threat wasn’t new and was just a follow-up to Kim’s earlier order to put troops on a high alert in response to annual U.S-South Korean military drills. Pyongyang sees those drills as rehearsals for an invasion; the allies call them routine and defensive.

In an indication North Korea is not immediately considering starting a war, officials in Seoul said South Korean workers continued Saturday to cross the border to their jobs at a joint factory park in North Korea that’s funded by South Koreans

On Friday, North Korean leader Kim Jong Un warned his forces were ready “to settle accounts with the U.S.” after two nuclear-capable U.S. B-2 bombers dropped dummy munitions on a South Korean island range as part of joint drills and returned to their base in Missouri.

North Korean state media later released a photo of Kim and his senior generals huddled in front of a map showing routes for envisioned strikes against cities on both American coasts. The map bore the title “U.S. Mainland Strike Plan.”

At the main square in Pyongyang, tens of thousands of North Koreans turned out for a 90-minute mass rally in support of Kim’s call to arms. Small North Korean warships, including patrol boats, conducted maritime drills off both coasts of North Korea near the border with South Korea earlier this week, South Korean Defense Ministry spokesman Kim Min-seok said in a briefing Friday. He didn’t provide details.

The spokesman said South Korea’s military was mindful of the possibility that North Korean drills could lead to an actual provocation. He said the South Korean and U.S. militaries are watching closely for any signs of missile launch preparations in North Korea. He didn’t elaborate.

Experts believe North Korea is years away from developing nuclear-tipped missiles that could strike the United States. Many say they’ve also seen no evidence that Pyongyang has long-range missiles that can hit the U.S. mainland.

Still, there are fears of a localized conflict, such as a naval skirmish in disputed Yellow Sea waters. Such naval clashes have happened three times since 1999. There’s also danger that such a clash could escalate. Seoul has vowed to hit back hard the next time it is attacked.

“The first strike of the revolutionary armed forces of the DPRK will blow up the U.S. bases for aggression in its mainland and in the Pacific operational theatres including Hawaii and Guam,” the North said Saturday in the statement carried by the official Korean Central News Agency. DPRK stands for the Democratic People’s Republic of Korea, the North’s official name.

Pyongyang uses the U.S. nuclear arsenal as a justification for its own push for nuclear weapons. It says that U.S. nuclear firepower is a threat to its existence.

Published March 30, 2013 / FoxNews.com /The Associated Press and Reuters contributed to this report.