Notice: Function add_theme_support( 'html5' ) was called incorrectly. You need to pass an array of types. Please see Debugging in WordPress for more information. (This message was added in version 3.6.1.) in /home/kj8d9sfz7jzn/public_html/federalistpress.com/wp-includes/functions.php on line 5831
 Netanyahu Urges Americans to Vote for Romney 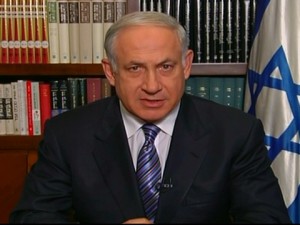 In an unprecedented direct appeal to US voters on Sunday, Israeli Prime Minister Benjamin Netanyahu urged American voters to elect a president willing to draw a “red line” with Iran. Everyone with any understanding of the political landscape understands that this is an unmistakeable endorsement of Mitt Romney.

In our article on Saturday, Why Catholics and Jews Should Support Romney (September 15, 2012), we enumerated the many reasons why American Jews and Catholics should reject the blistering rebukes against their religious interests by President Barack Hussein Obama and embrace the GOP candidate, Mitt Romney. It turns out that the Israeli Prime Minister agrees.

Prime Minister Netanyahu bolstered his plea with comparisons of Tehran’s claims that its nuclear program is for peaceful energy purposes to domestic terrorist Timothy McVeigh, saying that it would be foolish to believe either one has honorable intentions while stocking up on components for WMDs.

Indeed, President Barack Hussein Obama has entirely ignored the many requests of America’s strongest ally in the Middle East since taking office, and has shown distinct and unmistakable favoritism for Muslims and Islamic extremists in the region. With more than 20 Muslim nations now storming America’s embassies, murdering our diplomats, and violently protesting our presence, many GOP leaders are drawing comparisons between the current administration and the similarly naive and flawed administration of President Jimmy Carter–who was overwhelmingly denied a second term by American voters for very similar reasons.