Notice: Function add_theme_support( 'html5' ) was called incorrectly. You need to pass an array of types. Please see Debugging in WordPress for more information. (This message was added in version 3.6.1.) in /home/kj8d9sfz7jzn/public_html/federalistpress.com/wp-includes/functions.php on line 5831
 New Poll: Obama Ratings Dip, Voters Say Government ‘Out of Control’ 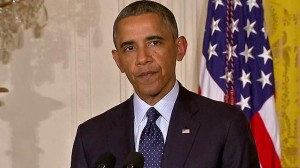 After a week of revelations about government spying on reporters and the Internal Revenue Service targeting conservatives, most voters feel “like the federal government has gotten out of control and is threatening the basic civil liberties of Americans.”

At the same time, a new Fox News poll finds disapproval of President Obama’s job performance is above 50 percent for the first time in a year, his honesty rating is at a new low and half of voters already think he’s a lame-duck.

More than two-thirds of voters — 68 percent — feel the government is out of control and threatening their civil liberties.   About one quarter disagree (26 percent).

Nearly half of Democrats (47 percent), as well as large numbers of independents (76 percent) and Republicans (87 percent) feel Uncle Sam is taking liberties with their liberties.

Those who identify with the Tea Party movement, one of the groups targeted by the IRS, are among those most likely to say things are out of control and civil liberties are being threatened:  92 percent of Tea Partiers feel that way.

Six in 10 Americans say the Justice Department “went too far” when it seized the phone records of reporters working at the Associated Press (AP) without prior notice.  That’s almost twice as many as the 31 percent who think the actions were “justified” because the government was looking for leaks about a terrorist plot.

Most Republicans (77 percent) and a majority of independents (62 percent) feel the Justice Department went too far.  Nearly half of Democrats agree (45 percent), while almost as many say the government was justified (44 percent).

The recent controversies have taken a toll on the president’s standing with voters.

The increase in disapproval of Obama is driven mainly by independents (+ 7 percentage points) and Republicans (+8 points).  Disapproval among Democrats remained mostly unchanged (15 percent).

The poll also finds more voters questioning Obama’s honesty.  Some 49 percent think Obama is honest and trustworthy today.  That’s down from 51 percent last July — and the first time in a Fox News poll that less than half of voters said Obama was honest.  Obama’s highest honesty rating was 73 percent in April 2009, when he had been in office about 100 days.

A record number also now thinks Obama is not honest: 48 percent in the new poll, up from 46 percent last summer.

Nearly half of voters now consider Obama a lame-duck president.  Less than a year into his second term, 49 percent of voters say Obama is a lame-duck, including 25 percent of Democrats.

Almost as many voters — 47 percent — say Obama still has the power to get things done.

More than twice as many voters rate Obama’s leadership skills as “poor” (36 percent) as rate them as “excellent” (15 percent).

Many more voters disapprove (40 percent) than approve (28 percent) of the job Eric Holder is doing as attorney general.  A third are unable to rate him (32 percent).  Approval of Holder is down eight points from 36 percent in May 2010, when voters were last asked about his performance on a Fox News poll.

Holder is the head of the Justice Department.  He has recused himself from the current AP investigation.

Which of the current Obama administration scandals is the most troublesome to voters?  The largest number says the IRS targeting of conservative groups (32 percent), and that’s closely followed by Benghazi (27 percent).  About one in five say the Justice Department seizing the phone records of reporters concerns them the most (21 percent).

Even if voters had known before the election what they know now about the Obama administration controversies, the consensus is he still would have won:  62 percent say Obama would have still won re-election, while 33 percent think Romney would have won.

The Fox News poll is based on landline and cell phone interviews with 1,013 randomly chosen registered voters nationwide and was conducted under the joint direction of Anderson Robbins Research (D) and Shaw & Company Research (R) from May 18 to May 20.  The full poll has a margin of sampling error of plus or minus three percentage points.