Notice: Function add_theme_support( 'html5' ) was called incorrectly. You need to pass an array of types. Please see Debugging in WordPress for more information. (This message was added in version 3.6.1.) in /home/kj8d9sfz7jzn/public_html/federalistpress.com/wp-includes/functions.php on line 5831
 New York Times Condemns Trump’s CNN-WWE Re-tweet — But Sponsors Play Depicting His ‘Assassination’

The New York Times is reporting on “criticism, disbelief and dumbfoundedness” in the wake of President Donald Trump’s tweet on Sunday in which the president is depicted wrestling and punching a figure whose head has been replaced with the logo for CNN.

Times’ personalities condemned the tweet as, among other things, a “call for violence against the media,” and “unseemly that the president would attack journalists for doing their jobs, and encourage such anger at the media.” 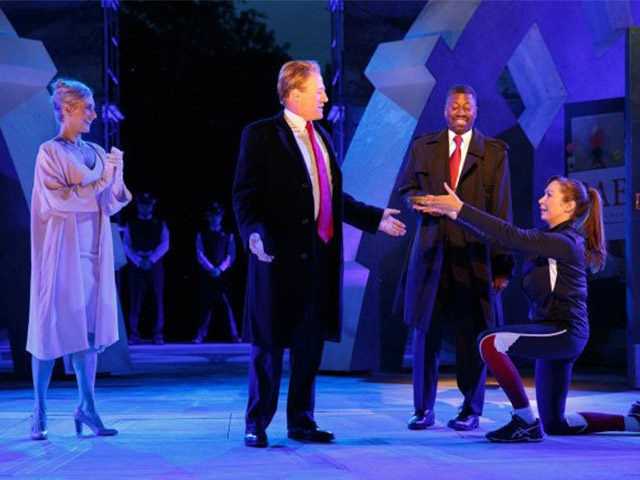 Unmentioned by the newspaper is that The Times stood by its decision to back the controversial production of “Julius Caesar” in Central Park in which Caesar was glaringly depicted as a Trump-like figure being brutally assassinated by Roman senators.

For those who doubted the play’s intent, the production also featured Calpurnia, Caesar’s wife, speaking with a Slavic accent resembling that of First Lady Melania Trump.

The Times continued to back the play even after companies like Delta Air Lines, American Express and Bank of America pulled their sponsorship following public outcry.

“As an institution that believes in free speech for the arts as well as the media,” The Times said in a statement, “we support the right of the Public Theater to stage the production as they choose.”

Trump’s tweet was accompanied by the hashtag #FraudNewsCNN #FNN.  The video seems to have been an edited version of a 2011 appearance that Trump made at the WrestleMania competition. 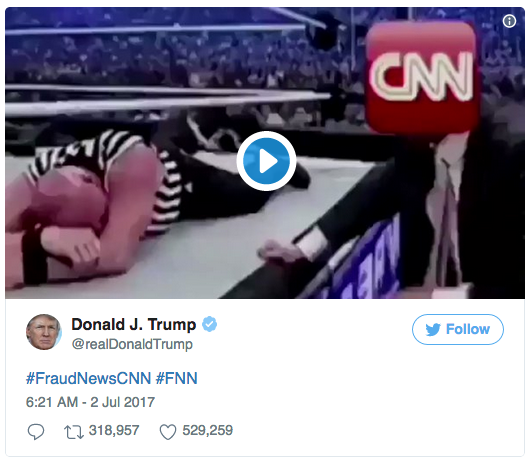 Alan Rappeport, The Times’ economic policy reporter, labeled the tweet a “call for violence against the media.”

Dean Baquet, executive editor of The Times, was quoted by the newspaper stating, “I think it is unseemly that the president would attack journalists for doing their jobs, and encourage such anger at the media.”

The Times’ article reporting on Trump’s tweet told readers the missive “stirred criticism, disbelief and dumbfoundedness. Some journalists denounced its portrayal of violence as dangerous, saying it could incite attacks or threats against news media employees.”

Trump’s CNN tweet comes as members of the news media have repeatedly falsely depicted the U.S. president as a usurper who may have colluded with Russia to steal the 2016 presidential election.

One establishment talking point, as Breitbart News previously documented, had numerous Democratic Party operatives and media pundits repeatedly using the word “treason” in a seeming attempt to smear Trump over unproven claims of collusion with Russia during the 2016 presidential campaign.

The Russia narrative seems to have angered James T. Hodgkinson, the man who shot up lawmakers and aides at a practice in Alexandria, Va., for an annual congressional baseball game. Hodgkinson reportedly expressed anti-Trump sentiment on his Facebook page tied to the unproven Russia collusion claims. House Majority Whip Steve Scalise was critically wounded in the shooting attack and four others were injured.

One posting indicates that Hodgkinson signed a change.org petition for “the legal impeachment and or legal removal of The President & Vice President, et al., for Treason and Misprision of Treason.”

Another indicates that Hodgkinson signed a change.org petition asking past presidents to urge Congress to launch a “powerful and independent inquiry” into the Trump campaign’s contacts with Russia.

Another indicates that he signed a change.org petition supporting legislation sponsored by Massachusetts US Representative Katherine Clark that would require Trump to place his assets in a blind trust or disclose when he makes a decision that affects his personal finances.

CNN in recent days has been facing a public relations crisis concerning its Russia coverage.

The network has been under fire for the last week, after CNN retracted a story that relied on one anonymous source to allege ties between a Trump ally and a Russian investment bank.  Three CNN staffers reportedly resigned in the wake of the scandal.  The network abruptly deleted and then retracted the story after the narrative was questioned by Breitbart’s Matt Boyle.

CNN faced more controversy after Project Veritas founder James O’Keefe released a video in which the network’s supervising producer, John Bonifield, who works for the medical and health section, referred to the Russia interference story as “mostly bullshit” while indicating the story was being pumped for ratings.

“I just feel like they don’t really have it, but they want to keep digging. And so I think the president is probably right to say, like, look you are witch hunting me,” Bonifield was filmed stating. “You have no smoking gun, you have no real proof.”

O’Keefe followed that up with a second video in which CNN commentator Van Jones called the Russia collusion story a “big nothing burger.”