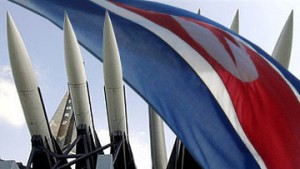 Obama administration officials scrambled to downplay the errant disclosure of a classified portion of an intelligence report finding that North Korea has advanced its nuclear knowledge to the point that it could arm a ballistic missile with a nuclear warhead.

The analysis, disclosed Thursday at a hearing on Capitol Hill, says the Pentagon’s intelligence wing has “moderate confidence” that North Korea has nuclear weapons capable of delivery by ballistic missiles but that the weapon was unreliable.

The revelation was significant, because it has not been previously reported or believed that the country had the ability to miniaturize and deliver a nuclear weapon.

But top U.S. officials repeatedly stressed that the finding does not mean North Korea has the capabilities to launch a nuclear missile with any reliability at this point.

“It is inaccurate to suggest that the (North Korea) has the capability articulated in that report — they have a missile but that is very different than having the militarization, nuclearization, etcetera,” Secretary of State John Kerry said Friday, after landing in South Korea as part of a tour of Asian countries.

On Thursday night, the Pentagon and Director of National Intelligence James Clapper both downplayed the report.

“While I cannot speak to all the details of a report that is classified in its entirety, it would be inaccurate to suggest that the North Korean regime has fully tested, developed, or demonstrated the kinds of nuclear capabilities referenced in the passage,” Pentagon spokesman George Little said. Clapper echoed the assessment.

Meanwhile, North Korea was leveling new threats Friday. According to South Korea’s Yonhap News Agency, the regime warned that Tokyo would, in the event of a war, be the first target “if it continues to maintain its hostile posture.” North Korea was apparently threatening Japan because it vowed to destroy any missile heading toward the country.

Separately, South Korean President Park Geun-hye reportedly said she’s open to working with the North to resolve the standoff if the regime ends its provocative behavior.

The dispute over the North’s nuclear capability started with the Capitol Hill hearing Thursday. At the hearing, Rep. Doug Lamborn, R-Colo., read aloud what he said was an unclassified paragraph from a secret Defense Intelligence Agency report that was supplied to some members of Congress.

He said, reading from the report: “DIA assesses with moderate confidence the North currently has nuclear weapons capable of delivering by ballistic missiles, however the reliability will be low.”

The reading seemed to take Gen. Martin Dempsey, chairman of the Joint Chiefs of Staff, by surprise, who said he hadn’t seen the report and declined to answer questions about it.

Pentagon officials told Fox News that the memo he read from was in fact classified. However, someone at the Defense Intelligence Agency mistakenly marked it “unclassified,” which led to the confusion.

A U.S. official in Seoul said Friday it is “premature” to say North Korea has developed the expertise to make a nuclear weapon small enough to put on a ballistic missile.

“It is a very difficult task,” the official told Fox News. “They haven’t been able to put everything together.”

The official also says there is no indication a North Korea missile launch is imminent, saying officials “have not seen activity” that would show that a launch will happen soon, or that the country is planning a large scale attack.

“There has been no indication of massive troop movements or anything to back up the rhetoric going on,” the official said.

Meanwhile, Kerry’s trip to South Korea comes in the midst of bellicose threats from the unpredictable communist regime in the North.

Kerry and his South Korean counterpart said in a joint press conference Friday that North Korea will gain nothing by threatening tests of its missile or nuclear programs.

Kerry said the U.S. and its Asian ally won’t accept the North as a nuclear power, calling the country’s rhetoric “unacceptable.”

Since the beginning of March, the Navy has moved two missile defense ships closer to the coast of the Korean peninsula, in part to protect against a potential missile launch aimed at Guam, a U.S. territory in the Pacific.

The Pentagon also has announced it will place a more advanced land-based missile defense on Guam, and Hagel said in March that he approved installing 14 additional missile interceptors in Alaska to bolster a portion of the missile defense network that is designed to protect all of U.S. territory.

On Thursday, the Pentagon said it had moved a sea-based X-band radar — designed to track warheads in flight — into position in the Pacific.

Notably absent from that unclassified segment of the Pentagon report was any reference to what the DIA believes is the range of a missile North Korea could arm with a nuclear warhead. Much of its missile arsenal is capable of reaching South Korea and Japan, but Kim has threatened to attack the United States as well.

But David Wright, a nuclear weapons expert at the Union of Concerned Scientists, said the DIA assessment probably does not change the views of those who closely follow developments in North Korea’s pursuit of a nuclear weapon.

“People are starting to believe North Korea very likely has the capability to build a nuclear weapon small enough to put on some of their shorter-range missiles,” Wright said. “Once you start talking about warheads small enough and technically capable to be on a long-range missile, I think it’s much more an open question.”

The DIA assessment is not out of line with comments Dempsey made Wednesday when he was asked at a Pentagon news conference whether North Korea was capable of pairing a nuclear warhead to a ballistic missile that could reach Japan or beyond.

In response, Dempsey said the extent of North Korean progress on designing a nuclear weapon small enough to operate as a missile warhead was a classified matter. But he did not rule out that the North has achieved the capability revealed in the DIA report.

“They have conducted two nuclear tests,” Dempsey told a Pentagon news conference. “They have conducted several successful ballistic missile launches. And in the absence of concrete evidence to the contrary, we have to assume the worst case, and that’s why we’re postured as we are today.” He was referring to recent moves by the U.S. to increase its missile defense capabilities in the Pacific.

At the same House hearing where Lamborn revealed the DIA conclusion, Defense Secretary Chuck Hagel was asked a different version of the same question: Does North Korea have the capability to strike U.S. territory with a nuclear weapon? Hagel said the answer is no.

“Now is the time for North Korea to end the belligerent approach they have taken and to try to lower temperatures,” Obama said in his first public comments since Pyongyang threatened the United States and its allies in East Asia with nuclear attack.

Obama, speaking from the Oval Office, said he preferred to see the tensions on the peninsula resolved through diplomatic means, but added that “the United States will take all necessary steps to protect its people.”

The North on Thursday delivered a fresh round of war rhetoric with claims it has “powerful striking means” on standby, the latest in a torrent of warlike threats seen by outsiders as an effort to scare and pressure South Korea and the U.S. into changing their North Korea policies.

Fox News’ Justin Fishel and Greg Palkot and The Associated Press contributed to this report.