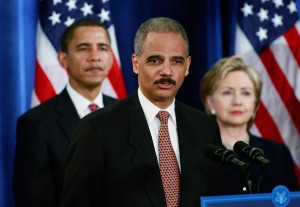 The Obama administration has been collecting the phone records of millions of U.S. customers of Verizon under a top secret court order, according to a British newspaper report which raised new and troubling privacy questions.

A senior law enforcement official pushed back on the report early Thursday morning, telling Fox News that the Justice Department has not yet received a referral from the intelligence community, meaning “the process has not started yet.”

But the administration has not denied the existence of the order. While the administration defended its authority to seize phone records — and stressed that it does not monitor calls — one civil liberties group called this the “broadest surveillance order to ever have been issued.”

“It requires no level of suspicion and applies to all Verizon subscribers anywhere in the U.S.,” the Center for Constitutional Rights said in a statement.

The report in the Guardian newspaper

follows revelations that the Justice Department was seizing the phone records of journalists, including at Fox News, in the course of leak probes.

The order, a copy of which apparently was obtained by The Guardian

, reportedly was granted by the secret Foreign Intelligence Surveillance Court on April 25 and is good until July 19.

It requires Verizon, one of the nation’s largest telecommunications companies, on an “ongoing, daily basis” to give the NSA information on all telephone calls in its systems, both within the U.S. and between the U.S. and other countries.

The text of the order, as published by The Guardian, says that “the Custodian of Records shall produce to the National Security Agency (NSA) upon service of this Order, and continue production on an ongoing daily basis thereafter for the duration of this Order, unless otherwise ordered by the Court, an electronic copy of the” the records in question.

The newspaper claims the document shows for the first time that under the Obama administration the communication records of millions of U.S. citizens were being collected indiscriminately and in bulk, regardless of whether they were suspected of any wrongdoing.

Neither Fox News nor the Associated Press could authenticate the report as of early Thursday.

Under the terms of the order, the phone numbers of both parties on a call are handed over, as is location data, call duration, unique identifiers, and the time and duration of all calls, The Guardian said.

A senior administration official, while not confirming the report, told Fox News a FISA court order would not allow the government to listen in on anyone’s phone calls, saying that all the government would be able to collect would be metadata such as the telephone number or the length of the call.

The official also said that any court orders issued under FISA are subject to “strict controls” to ensure the rights of citizens are not violated.

“Information of the sort described in the Guardian article has been a critical tool in protecting the nation from terrorist threats to the United States, as it allows counterterrorism personnel to discover whether known or suspected terrorists have been in contact with other persons who may be engaged in terrorist activities, particularly people located inside the United States,” the official said.

“From a civil liberties perspective, the program could hardly be any more alarming. It’s a program in which some untold number of innocent people have been put under the constant surveillance of government agents,” Jaffer said in a statement.

If true, the broad, unlimited nature of the records being handed over to the NSA is unusual. FISA court orders typically direct the production of records pertaining to a specific named target suspected of being an agent of a terrorist group or foreign state, or a finite set of individually named targets. NSA warrantless wiretapping during the George W. Bush administration after the 9/11 attacks was very controversial.

The FISA court order, signed by Judge Roger Vinson, compelled Verizon to produce to the NSA electronic copies of “all call detail records or telephony [sic] metadata created by Verizon for communications between the United States and abroad” or “wholly within the United States, including local telephone calls,” The Guardian said.

The law on which the order explicitly relies is the “business records” provision of the USA Patriot Act.